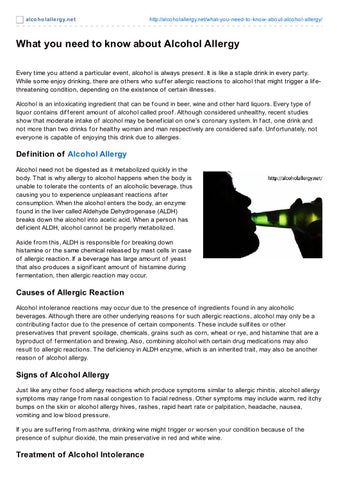 What you need to know about Alcohol Allergy Every time you attend a particular event, alcohol is always present. It is like a staple drink in every party. While some enjoy drinking, there are others who suf f er allergic reactions to alcohol that might trigger a lif ethreatening condition, depending on the existence of certain illnesses. Alcohol is an intoxicating ingredient that can be f ound in beer, wine and other hard liquors. Every type of liquor contains dif f erent amount of alcohol called proof . Although considered unhealthy, recent studies show that moderate intake of alcohol may be benef icial on oneâ&#x20AC;&#x2122;s coronary system. In f act, one drink and not more than two drinks f or healthy woman and man respectively are considered saf e. Unf ortunately, not everyone is capable of enjoying this drink due to allergies.

Def inition of Alcohol Allergy Alcohol need not be digested as it metabolized quickly in the body. T hat is why allergy to alcohol happens when the body is unable to tolerate the contents of an alcoholic beverage, thus causing you to experience unpleasant reactions af ter consumption. When the alcohol enters the body, an enzyme f ound in the liver called Aldehyde Dehydrogenase (ALDH) breaks down the alcohol into acetic acid. When a person has def icient ALDH, alcohol cannot be properly metabolized. Aside f rom this, ALDH is responsible f or breaking down histamine or the same chemical released by mast cells in case of allergic reaction. If a beverage has large amount of yeast that also produces a signif icant amount of histamine during f ermentation, then allergic reaction may occur.

Causes of Allergic Reaction Alcohol intolerance reactions may occur due to the presence of ingredients f ound in any alcoholic beverages. Although there are other underlying reasons f or such allergic reactions, alcohol may only be a contributing f actor due to the presence of certain components. T hese include sulf ites or other preservatives that prevent spoilage, chemicals, grains such as corn, wheat or rye, and histamine that are a byproduct of f ermentation and brewing. Also, combining alcohol with certain drug medications may also result to allergic reactions. T he def iciency in ALDH enzyme, which is an inherited trait, may also be another reason of alcohol allergy.

Signs of Alcohol Allergy Just like any other f ood allergy reactions which produce symptoms similar to allergic rhinitis, alcohol allergy symptoms may range f rom nasal congestion to f acial redness. Other symptoms may include warm, red itchy bumps on the skin or alcohol allergy hives, rashes, rapid heart rate or palpitation, headache, nausea, vomiting and low blood pressure. If you are suf f ering f rom asthma, drinking wine might trigger or worsen your condition because of the presence of sulphur dioxide, the main preservative in red and white wine.

Alcohol allergy is totally curable and the best way to avoid alcohol intolerance symptoms is to avoid alcoholic beverages completely. But there are instances when you canâ&#x20AC;&#x2122;t help but drink, especially when youâ&#x20AC;&#x2122;re out on a party. In case minor allergic reactions due to alcohol occur, there are available over-the-counter antihistamines that may aid in reducing allergies to alcohol symptoms such as itching or hives. On the other hand, severe allergic reaction such as when the patient who has asthma suf f ers f rom anaphylaxis requires perf ormance of emergency procedures to provide relief to the patient. Also, the doctor may prescribe emergency epinephrine in the f orm of auto injector in case alcohol allergy reactions are severe.

Prevention Unf ortunately, there is no medication that can prevent allergic reaction caused by alcohol. However, the key to drinking any f orm of alcoholic beverage is moderate use or if possible, avoidance. Determine f irst whether there are substances in alcohol beverage that are you are allergic so that you will know which one to avoid. Bef ore drinking, read the label caref ully and see whether the drink contains substances that can contribute to your allergies. If you can quit drinking, then simply quit. Alcoholallergy net what you need to know about alcohol allergy

Alcoholallergy net what you need to know about alcohol allergy