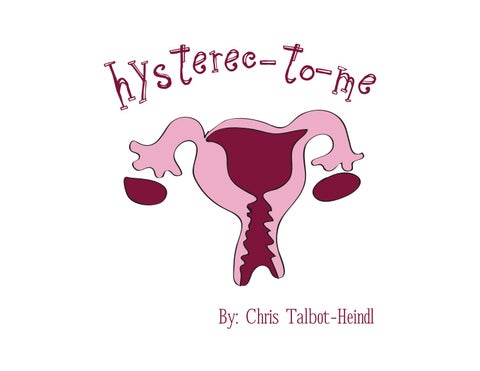 Iâ&#x20AC;&#x2122;ve always had a complicated relationship with my uterus. I hated it and its favorite passtime was causing me pain.

When I was 10 years old and first started getting my period, I dreamed of the time I wouldnâ&#x20AC;&#x2122;t. Tampons scared me. Pads were bulky. And I hated the pain and moods.

That was about the time â&#x20AC;&#x153;Theyâ&#x20AC;? put me on birth control to control my irregular flow and the crippling pain. This action inadvertently triggered my autoimmune deficiency disorder.

because of the autoimmune deficiency disorder, I couldn’t take birth control. I also couldn’t carry to term - something I learned the hard way in my early 20’s with an unplanned pregnancy and the miscarriage that followed.

I decided to seek out a tubal ligation since no doctor would just take the damned thing out. Because we don’t trust women to make their own decisions, I had to go to a year of counseling to prove that I wasn’t crazy or seeking the surgery for the “wrong reasons.” Funny they don’t require that for parenting..

After I finally got my tubal ligation the hoopla of which is a different story - I had an ovarian cyst rupture during recovery. I thought I was dying.

I again wondered why they couldn’t just take the whole works out - I wasn’t going to use it - I couldn’t. But I was told over and over again that I couldn’t make that decision - I was too young, I may one day marry a man who wanted children (tough luck), and it was my “womanhood.”

six years later, a friend convinced me to see a specialist after experiencing 14 day periods regularly. â&#x20AC;&#x153;Theyâ&#x20AC;? decided to put in an IUD without estrogen so as to not aggravate my autoimmune deficiency disorder.

For nearly a year, everything was great! I had less bleeding and less pain. But then my uterus targeted me again. I began having 30 day periods with 4-5 days off. The bleeding was making me regularly sick and lethargic. I began getting scared to leave the house.

I made an appointment with a specialist who said that he was concerned with my quality of life. This was the first doctor who ever said that to me. He suggested we take the whole thing out - after all, I wasn’t using it. He said, “I can’t believe you’ve been through all of this already. Let’s just take it out.”

As it turns out, the IUD was getting smooshed as the uterine wall had been gathering, building on itself over and over. And there were tumors everywhere.

my surgeon took the damned thing out just in time, as the IUD was about to rupture a cyst that had developed inside my uterus. in a month or two, I would have needed an emergency hysterectomy anyway.

I silently thank my doctor every time I leave the house for derby practice or to climb a mountain or even to go to work. and I thank him for giving me bodily autonomy to have the whole damned thing taken out.

The story of my complicated relationship with my uterus and how I solved it by getting the damned thing taken out.

The story of my complicated relationship with my uterus and how I solved it by getting the damned thing taken out.