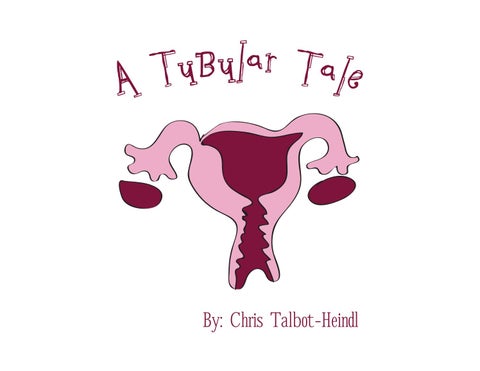 Iâ&#x20AC;&#x2122;ve always had a complicated relationship with my uterus. I hated it and its favorite passtime was causing me pain.

When I was 14, I started taking birth control to control my irregular flow and the crippling pain. This action inadvertently triggered my autoimmune deficiency disorder.

because of the autoimmune deficiency disorder, I couldn’t take birth control. I also couldn’t carry to term - something I learned the hard way in my early 20’s with an unplanned pregnancy and the miscarriage that followed.

Because “we” don’t trust women to make their own decisions, I had to go to a year of counseling to prove that I wasn’t crazy or seeking the surgery for the “wrong reasons.” Funny - they don’t require that for parenting..

I saw the shrink a couple of times and she saw no reason to see me again. She told me to come back when the time was up and she would sign off on my surgery.

I should have known something was hinky when they took me to an abandoned part of st michael’s for the surgery. it was explained to me that this was a “catholic” hospital and they don’t authorize “these kinds” of surgeries.

after all, who would want a grown ass woman deciding to protect herself against an unwanted and unviable pregnancy? But i kept my mouth shut because this was the first time I had received a â&#x20AC;&#x153;yesâ&#x20AC;? on doing it at all.

when I woke up from anesthesia, I was informed that they had banded my tubes rather than performed the cut and cauterize i thought they were doing.

when I asked them why they would do that, they said it was because I was too young and I may change my mind.

a few weeks later - I had an ovarian cyst rupture during recovery. I thought I was dying.

I spent an anxious and tearful SAturday in st. michaelâ&#x20AC;&#x2122;s emergency room getting such uncomfortable things like a transvaginal ultrasound wand and specula shoved inside of me while the ultrasound technician complained about being woken up on a saturday.

It was explained to me that my tubal ligation may have aggravated a cyst which then ruptured. I was sent home with some pain pills. Ibuprofen 3

A few more weeks later, I wound up in St. Michaelâ&#x20AC;&#x2122;s emergency room again - this time for an infection in my incision area. The doctor informed me that the surgeon had used the wrong type of sutures. He went so far as to guess the surgeon in question. He removed them and scraped away the infection. I was sent home with some pain pills.

turns out, since they are a “catholic” hospital, they were charging me for the private floor they performed the surgery on and charging me double for the surgeon - since he was “subcontracted” to perform the surgery by the hospital that he worked for.

I attempted to argue since they should have had record of my phone call to the office asking how much the surgery cost prior to requesting it.

They said it was my fault for not asking specifically if i would be charged double since i was a single, unmarried woman. I drained my savings account to pay for the extra bills and counted myself lucky that in the 2000’s I was even “allowed” the “courtesy” of making my own reproductive choices. The End.

The story about the hoopla surrounding Chris's tubal ligation.

The story about the hoopla surrounding Chris's tubal ligation.