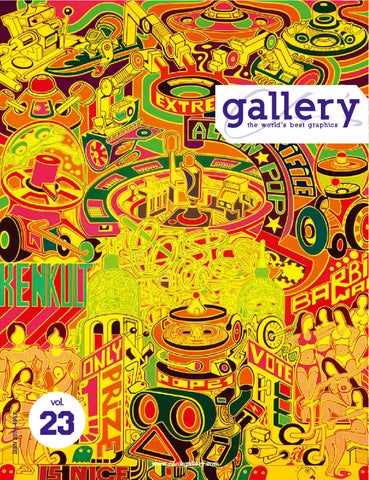 routes were defined by block walls to suggest the

project is located in the Roppongi Hills tower in

For previous sections of the interior, KDa created

from refigured Google icons such as the Google

Android and Google Map pin. For the new spaces,

or simply to hang out between bursts of work.

graphics whose tone varies from light to dark wood.

Colour and cultural imagery is used to help with

to give each area a distinct character. Circulation

The Spotlight of this edition comes from the Klein Dytham

The cover image is an illustration entitled 'Sacrifice Alien

in the space create a fun and inspiring workplace, which is

also a genuine combination of graphic and environment.

Autobahn — All about creativity and fun by Diana Ruyue Dai

Maarten Dullemeijer and Rob Stolte are two Dutch graphic designers based in Utrecht. After graduating from the Utrecht School of the Arts, the two classmates founded a design studio called Autobahn in 2006. Since then, Autobahn has presented commercial and self-initiated projects with exhibitions all over the world, whilst also designing for clients and agencies like Sony Playstation Network, Art Directors Club Netherlands, 180 Amsterdam, and Mediapartners. Their work has been awarded with six European Design Awards, among other prizes. Maarten and Rob were guest lectures of typography at Willen de Kooning Academy in Rotterdam in 2010 and at the Utrecht School of the Arts in 2013.

In the information age, anyone can be a journalist, a

photographer, a painter or even a designer. Designing

day long; instead, it stems from a hobby, a sport, a tour, a

resources are everywhere, and they are free and available

relationship… from the things you have fun with.

to any amateur who wants to give it a try. So, what

distinguishes the professionals from the wannabes?

It is their creativity. The power of creative ideas means that

creativity and fun in equal measure.

Besides, this issue of Gallery magazine has its first ever

of art work are ready for you to explore.

Autobahn, and they revealed us their working methods combining creativity and fun in equal measure.

Before After COMING SOON

Sound Stories The goal was to create a poster campaign to promote the audiobook section from our e-commerce client. The solution was to design custom soundwaves to show how sound can spark our imagination and create a sensation of imaginary worlds where stories come to life between our ears. 150 characters were designed from scratch in rich detail.

illustrations of totally unique digital art that would

institutional campaign that would show the concept

reflect the concept of novelty in printed form, with

behind the publication: what is newest in digital art.

fresh paint merging with the illustration on the cover.

The cover of Computer Arts features true works of

To do this, Pict Studio actually used real painting with

art made by renowned designers, making for a great

showcase. Taking these two concepts, we made

No animal trafficking The public interest advertising promoted by the Body

one perpetrator. Posters in the form of news bytes

shop is aimed to tell the public that animal trafficking

were used to announce sudden deaths of the animals

is not just a global crime, it is also an attitude can be

caused by foolish or funny means. What actually killed

traced back to each of us.

these animals are not dark corporations or greedy

The campaign narrowed down the story of animal

traders, but people's blind devotion to myths and

trafficking to the most basic element - one animal,

Oh, a Deer! For the Berlin band GrossstadtgeflĂźster, Rocket & Wink developed the artwork of their third album: Oh, ein Reh! (Oh, a deer!)

The Children's Republic of Shoreditch The Ministry of Stories is a charity that aims to inspire young people through creative writing. Founded by Nick Hornby, Ben Payne & Lucy Macnab, and operating out of The Hoxton Street Monster Supplies Shop, they run workshops and provide one-to-one mentoring to local children. Much of the work is undertaken by volunteers, and when they asked us to help with their latest project we happily agreed. The Ministry were establishing a Children's Republic. It was going to have its own Embassy and needed all the collateral that a new nation requires â&#x20AC;&#x201C; identity, passports, signage, letterheads, information posters. The children had even written their own manifesto. The identity needed to be simple. Any logo that we gave the Embassy had to be easy for the children to reproduce or change. It should not be static. The imagination the children had shown developing the Embassy was staggering â&#x20AC;&#x201C; there were lots of big ideas. So we started drawing big heads for those ideas. And then realised a big head on a small body is quite a good symbol for a child. The logo can change to illustrate the manifesto, or the signage. It can be made into worksheets, and even the Embassy flag.

art and film. Both organisations struggled to

but this time the serifs of the bold, almost brutal

clearly identify themselves, even to the local arts

letterform symbolise different aspects: the steps up to

community, so in 2012 Johnson Banks began work to

the stage and festival 'bunting', whilst retaining links

completely redesign the identites of both the Dome

Reference to Herbert Bayer (for the Rosen hands/

and festival. Beginning with the Dome itself, they

took its extraordinary architecture as their starting

to create a homage to one of his favourite periods, the

point, basing the serif of the 'D' on the Regency era

Bauhaus. The image also echoes an open book and

decorative 'scallopping' that features throughout the

the sensory experience of the festival itself.

¯ Miss KO An underground Asian fusion restaurant located in the heart of Paris' most prestigious arrondissement. Entering the world of Miss Ko¯and you will find yourself transported to a busy Asian street. It's the future; a place where cultures collide, fantasy rules and nothing is what it seems. It's Blade Runner – only happy. The logotype is simply 9 grains of rice: the staple of all Asian cuisine and integral to the Asian way of life. Miss Ko¯ is young, sexy but eternally mysterious. She is a symbol of Asia, and the embodiment of its traditions and its strangeness. Her Yazuka tattoos reveal ties to an Asian underworld and expose her rebellious nature. The Ko ¯ clan is set to grow as new restaurant openings in New York and elsewhere will each feature different tattooed characters.

The Life Goddess We made great efforts to use traditional Greek cultural elements - as a visual link with the product's place of origin - with a dynamic and contemporary look and a sense of humour. Our "Life Goddess" logo sports an image of Amalthea â&#x20AC;&#x201C; the nymph in the form of a divine goat whose sacred horn could create unlimited nourishment of superior quality. A divine goat suggesting food and abundance is encircled within a golden sun, which symbolises the warmth responsible for the unique sweet ripening and growth of most Greek products. Brightly coloured, hand drawn characters and scenes from Greek tradition and folklore are used throughout. While aesthetically pleasing and unpretentious, they provide a subtle link to ancient Greek tales and customs of food production and consumption.

of excitement to people's common perception of

treasure. The company takes natural waste such as

pulp, pomace and fibre from industries that expel such

The identity is composed of numerous geometric

materials and transforms it into the world's finest

elements of the paper that together compose the X

Ratowsky Creative came up with the entire design

factor of Xotic Paper. The brand's logo paired with

execution from inception to completion. We wanted

print favoured CMYK values mold together to offer a

to come up with a modern, forward thinking approach

for the overall feel of Xotic Paper to add a level