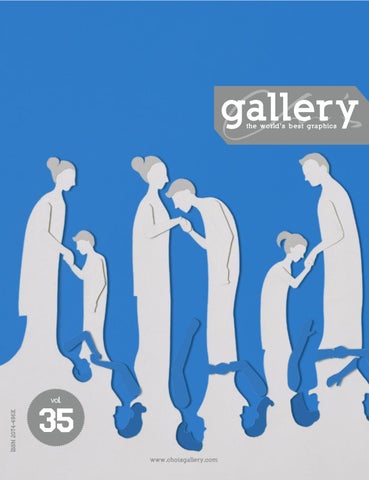 wordmark was derived from license plates and

the masses about the hazards of ignorance and

apathy regarding the personal implementation of

Gothic typeface was chosen for its highly legible

carrys an adorable sense of humor.

Inspired by the rhyming and humorous warning signs

the primary campaign colour and the others utilized

from the Border Roads organisation, the slogan "Be

and a set of installations.

of the project in a soundbite. The aesthetics of the

Chocolisto - Feed Your Child´s Future Feed Your Child's Future is a print ad design for Chocolisto from Rep Grey. This fresh design appoach is a real surprise. The colour choice helps to deliver a strong and impressive image while the layered cutting gives the work a dimensional effect.

Kaliber 44 "U amek Tarcia" Kaliber 44 is a hip-hop band formed at the end of 1993 in Katowice, Poland. After sixteen years they are back with their new album: "U AMEK TARCIA". Micha Dziekan designed and illustrated the album packaging while Maciej Dziekan was responsible for the graphics. The main idea for the design was to be "less" on the outside where minimalistic style plays the main role, while "more" on the inside with heavy detailed illustrations. The more you unfold the packaging, the more detailed and cluttered illustrations unveil. The packaging finishes with a folded poster in the digipack pocket.

Pogoria - Colorful Heart of Dąbrowa Górnicza City (Poland) Visual identity system for Pogoria Shopping Centre in Dąbrowa Górnicza City (Poland). The challenge was to rebrand so as to set the direction for changes in the building's architectural space. The main aim of such broad change was to enliven the public space in the area of Dąbrowa Górnicza. The name of Pogoria came from a group of water bodies called Pogoria, one of the beloved leisure areas of Dąbrowa Basin inhabitants. The round shapes of the letters make a reference to circles on the water. Introducing a whole range of vivid colours and the use of recurrent shapes (quarter and semicircles) has become a solution for the identification system. The result achieved consistency of the identification system and of the architectural designs and arrangements that are aimed at revamping the public space of the centre. Interior design elements and landscape architecture were styled on the basis of the characteristic elements of the identity system. Later on, the public space around Pogoria Shopping Centre welcomed a playground and greenery areas that was inspired by the solutions provided by "bna".

language; diverse, yet at the same time keeping a

and Peru's National Comission for Export and

Peruvian identity. To complete this in a flexible yet

Promotion. The goal was to encourage Peru as a

pictures of Peruvian elements such as ceramics,

had a launch week with diverse activities involving

local peppers and rare potatoes to interact with bold

innovation with Peruvian materials and knowledge.

The aim for Infinito Consultores was to create a visual

the space by printing objects on vinyl stickers and

placing them on walls. Furthermore, she realized

For this exhibition design project, to display the

thick cardboard and laser cutting in order to have a

products in only a few square meters, designer Elena

Caricasole decided to showcase them in a engaging

very neutral and pleasing ambient which was perfect

for the products of "Felicità a Pacchi".

doMEmentary VI Design for 1st Macao International Documentary Film Festival. Developed by Macau based designer Chi-Wai Un, the delightful illustration reflects on the theme "Every little thing deserves to be recorded." Using a pop of bright yellow to correspond with the joyous ambient, the design speaks a telling identity.

Confident’ Andreea Robescu is a Barcelona based multidisciplinary artist who designs with a playful and vibrant style. The main idea of this project was to break the boundaries of how the body and facial features are shown through photography in the fashion industry. Nowadays there is a fine line between sexual objectification and sexual freedom, by using a more relaxed and fun way of looking at things, the designer expressed and embraced the human sexuality in a playful way.

Photographers and magazines credits for project "Confident'" illustrations are in order

15. Aspen by Raúl Córdoba for Paraíso Magazine No.01