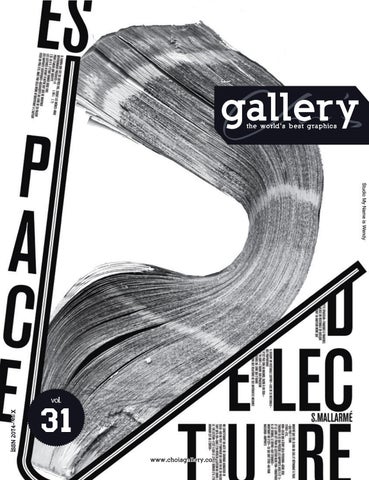 texts and media. Outside the building the letters are

identity of the Archives is based on the idea of

designed as self-supporting cubes made of colored

accumulation and storage. Conceived for bi- and

concrete. In the spaces open to the public, the letters

tridimensional use, it is applied to the wayfinding

become 'flatter' until they lose all volume in the

so as to enable the identification of the buildingâ&#x20AC;&#x2122;s

storage areas and are painted directly onto the walls.

Using plywood for the inside, the cubes have brilliant

Designed from square shapes, the letters make up

surfaces contrasted with the matt-colored wooden

a virtual grid system which allows arrangement of

// Client_French Ministry of Culture and Communication

Love Foundation Together with two friends I started a foundation called the Love Foundation, an open network of students, activists and artists that collectively generate money in order to provide clean drinking water and sanitary installations to the people living in rural Bihar, India, by selling our own fairtrade merchandise and organizing a variety of activities, ranging from arts exhibitions to music events. The centerpiece of the Love Foundation is the 'Love' logo. It connects all members and supporters of the foundation.

local characters he believed it will soon be frequented

driver, had been brewing craft beer on his own for

by and created a set of unique charaters.Together, we

years. For his upcoming, ever-elvolving range of

also developed a range of logos which harken back to

eclectic brews made from unusual ingredients, we

the old days of Minneapolis and Eastlake Avenue and

took inspiration from the rich cultural heritage of the

Eastlake Brewery neibourhood and the rotating cast of

and museum premises, to marketing and web design.

The work also included a redesign of the brand

at increasing the museumâ&#x20AC;&#x2122;s visibility and improving

identity. The new identity and logo were inspired by

visitor experience on all levels.

the golden age of Finnish design.

The project covered everything from exhibition design

Aena – Visual Language The new identity for Aena is born as a result of its recent IPO and the separation of its air navigation duties, which will be handled by the new public company Enaire. Biográfica has been commissioned to create the visual identity. With the aim of establishing a system which is flexible, unique, clear, we bring forth a set of tools and simple guidelines to accommodate all its communication needs. Also, we created individual tones for specific applications, as press inserts, publications, vehicles, charity spaces, Crèches and more.

Rawal Gin La Pesca Salada is a small cocktail bar located in the emblematic district of El Raval. Unique for its original decoration inspired by the marine world, it is well known as one of the pioneering gin-cocktail bars in Barcelona. Their gin line design is based on the same marine atmosphere that characterizes its space. It plays a visual game in each bottle with the image of a swimmer in different postures, interacting with the drinking process.

You Rock! For the 7th anniversary of an imagined drink brand, it is the perfect time to combine their love for brewing beer and handing out presents with a super limited package, which contains a glass and 2 home-brewed

beers. For the design, bright and funky colors are a big factor. The packaging is printed using three carefully selected PMS colors, giving it a really 'pop' sensation, while the bottle labels are silkscreened in three colors on transparent vinyl stickers, showing the color of the bottle and the beer.

The Pharmacy This poster was for the Pharmacyâ&#x20AC;&#x2122;s concert in Berlin.

had attracted quite a crowd, we did it again, but this

time around with a new optical effect. Six immense

and luminous black and white panels were erected

with the aim to promote this famous Montreal

and pierced in the center. Depending on passers-by's

neighbourhood. In the summers, the event transforms

location, they could see illustrations or words which

were unreadable from another position. Invited to

wander through those nebulous dream-like images,

For a second year, Paprika was invited to think up the

the audience can savor true pleasure in discovering

As our anamorphic installation from the previous year

to-digest format to bring the annual report to life.

that rescues excess food that would otherwise be

discarded. The OzHarvest annual report is a key

form and also incorporating infographics, it tells the

communication tool for it to educate consumers on

OzHarvest story in the perspective of organization

their important work and achievements on a yearly

insiders and those who are supported by it. The van-

Frost*collective took a creative approach that

hold design elements such as section titles, icons and

highlights the key themes of the year in an easy-