Last Seen: In the Washing Machine 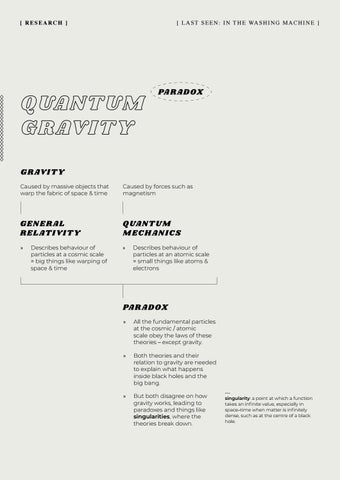 Caused by forces such as magnetism

Describes behaviour of particles at a cosmic scale = big things like warping of space &amp; time

All the fundamental particles at the cosmic / atomic scale obey the laws of these theories – except gravity.

Both theories and their relation to gravity are needed to explain what happens inside black holes and the big bang.

But both disagree on how gravity works, leading to paradoxes and things like singularities, where the theories break down.

--singularity: a point at which a function takes an infinite value, especially in space–time when matter is infinitely dense, such as at the centre of a black hole.

Last Seen: In the Washing Machine

Banner illustration based on the theme of quantum entanglement