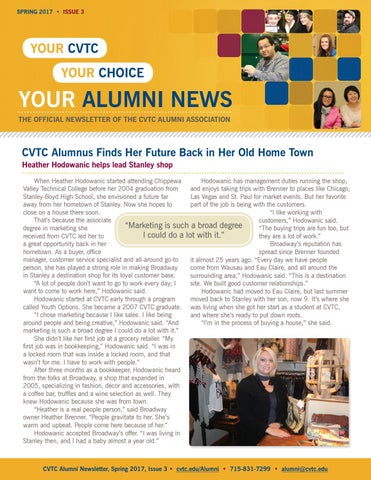 YOUR CVTC YOUR CHOICE

.............................................................................................................................. When Heather Hodowanic started attending Chippewa Hodowanic has management duties running the shop, Valley Technical College before her 2004 graduation from and enjoys taking trips with Brenner to places like Chicago, Stanley-Boyd High School, she envisioned a future far Las Vegas and St. Paul for market events. But her favorite away from her hometown of Stanley. Now she hopes to part of the job is being with the customers. close on a house there soon. “I like working with That’s because the associate customers,” Hodowanic said. “Marketing is such a broad degree degree in marketing she “The buying trips are fun too, but I could do a lot with it.” received from CVTC led her to they are a lot of work.” a great opportunity back in her Broadway’s reputation has hometown. As a buyer, office spread since Brenner founded manager, customer service specialist and all-around go-to it almost 25 years ago. “Every day we have people person, she has played a strong role in making Broadway come from Wausau and Eau Claire, and all around the in Stanley a destination shop for its loyal customer base. surrounding area,” Hodowanic said. “This is a destination “A lot of people don’t want to go to work every day; I site. We built good customer relationships.” want to come to work here,” Hodowanic said. Hodowanic had moved to Eau Claire, but last summer Hodowanic started at CVTC early through a program moved back to Stanley with her son, now 9. It’s where she called Youth Options. She became a 2007 CVTC graduate. was living when she got her start as a student at CVTC, “I chose marketing because I like sales. I like being and where she’s ready to put down roots. around people and being creative,” Hodowanic said. “And “I’m in the process of buying a house,” she said. marketing is such a broad degree I could do a lot with it.” She didn’t like her first job at a grocery retailer. “My first job was in bookkeeping,” Hodowanic said. “I was in a locked room that was inside a locked room, and that wasn’t for me. I have to work with people.” After three months as a bookkeeper, Hodowanic heard from the folks at Broadway, a shop that expanded in 2005, specializing in fashion, décor and accessories, with a coffee bar, truffles and a wine selection as well. They knew Hodowanic because she was from town. “Heather is a real people person,” said Broadway owner Heather Brenner. “People gravitate to her. She’s warm and upbeat. People come here because of her.” Hodowanic accepted Broadway’s offer. “I was living in Stanley then, and I had a baby almost a year old.”

A Message from the Alumni Relations Officer Dear CVTC Alumni, On Thursday, April 6, 2017, the CVTC Alumni Association held its largest Spring Gala ever. More than 338 alumni and friends of the College attended this celebratory event where we honored the 2017 Distinguished Alumni, Outstanding Recent Alumni, Proven Business Partner, and seven very deserving students who each received a $1,000 Alumni Association Scholarship. The theme of this year’s event was Rooted in Community. In keeping with this theme, I invite you to follow us on Facebook, become an alumni mentor, join an advisory committee, donate to a fund you are passionate about or simply reach out to the Alumni Association and let us know where you are today. Our Alumni Association staff at the College takes great pride in hearing stories from our alumni and seeing how each of you is impacting the communities in which you live. With warmest regards,

Gerry Kitzhaber retired as a colonel in the United States Army in 2008, but he’s still working in the Pentagon, and he recently received his doctorate in business administration. The path to his success started at Chippewa Valley Technical College. “I graduated from what was then District One Technical Institute in 1981 in Agriculture Mechanics,” Kitzhaber recalls. “I had joined the Neillsville unit of the Wisconsin Army National Guard in 1980.” He was accepted into Officer

Candidate School in 1982 and commissioned as a second lieutenant. He went on to engineer officer training at Fort Belvoir, VA, then came back home to study at UW-Stout, earning a graduate degree with concentration in industrial management in 1989. Col. Kitzhaber then accepted a full-time tour of duty with the Wisconsin Army National Guard, teaching ROTC at UW-Stevens Point. He was assigned to the National Guard Bureau in Washington, D.C. in 1991, then accepted a command tour with the 41st Infantry Brigade in Portland, OR, in 1995 before returning to Washington in 1998. “I was assigned to the Pentagon where I worked for the Army director of training. I was in the office during the attack on 9-11, and am happy to report I did survive,” he said. Col. Kitzhaber continued to work in the Pentagon until his 2008

retirement, but in March 2009 was hired by the Department of the Army as a civilian. “In my current position, I serve as the deputy principal to the assistant secretary of the Army for manpower & reserve affairs.” Col. Kitzhaber did not have a career in ag mechanics, but he has no regrets about attending CVTC. “CVTC taught me there was more to learn beyond high school,” he said. “More importantly, I learned the more you know, the more you know you don’t. Education doesn’t stop once you walk across the stage and accept your diploma; it is continuous and progressive throughout your life.” Col. Kitzhaber lives in Virginia with his wife, Eriko, with their two children nearby.

CVTC’s Promise Pay balance of tuition and fees for eligible students after scholarships and federal and state grants have been applied. The CVTC Foundation will cover this cost for up to six semesters. Books and supplies are not eligible for this funding. If you are interested in helping to support our future alumni, please contact Aliesha R. Crowe, executive director, CVTC Foundation, Inc., today to learn about giving opportunities at acrowe3@cvtc.edu or 715-833-6277.

Q: Do other foundations charge fees? A: Fees ranging from 1-6 percent are common at college and university foundations throughout the United States. Most community foundations also assess fees.

Q: Why has the Foundation adopted administrative fees? A: CVTC Foundation Inc., operates a comprehensive development effort in support of CVTC. The Foundation continues to increase private support to the College, which directly benefits students, academic programs, and other College initiatives. The addition of fees will cover a portion of the increasing costs of fundraising and operations efforts of the Foundation.

Q: Can the fees be waived? A: When a gift is made by a private foundation that has a written policy that prohibits paying gift fees, CVTC Foundation, Inc., will waive the fee. 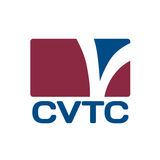