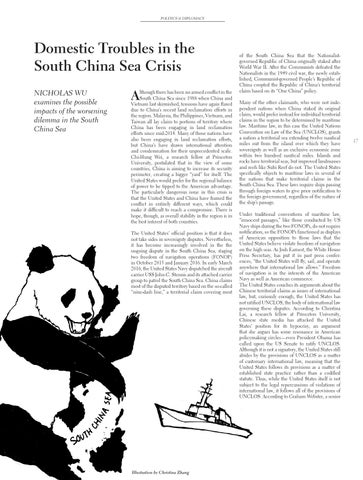 lthough there has been no armed conflict in the South China Sea since 1988 when China and Vietnam last skirmished, tensions have again flared due to China’s recent land reclamation efforts in the region. Malaysia, the Philippines, Vietnam, and Taiwan all lay claim to portions of territory where China has been engaging in land reclamation efforts since mid-2014. Many of those nations have also been engaging in land reclamation efforts, but China’s have drawn international attention and condemnation for their unprecedented scale. Chi-Hung Wei, a research fellow at Princeton University, postulated that in the view of some countries, China is aiming to increase its security perimeter, creating a bigger “yard” for itself. The United States would prefer for the regional balance of power to be tipped to the American advantage. The particularly dangerous issue in this crisis is that the United States and China have framed the conflict in entirely different ways, which could make it difficult to reach a compromise. There is hope, though, as overall stability in the region is in the best interest of both countries. The United States’ official position is that it does not take sides in sovereignty disputes. Nevertheless, it has become increasingly involved in the the ongoing dispute in the South China Sea, staging two freedom of navigation operations (FONOP) in October 2015 and January 2016. In early March 2016, the United States Navy dispatched the aircraft carrier USS John C. Stennis and its attached carrier group to patrol the South China Sea. China claims most of the disputed territory based on the so-called “nine-dash line,” a territorial claim covering most

of the South China Sea that the Nationalistgoverned Republic of China originally staked after World War II. After the Communists defeated the Nationalists in the 1949 civil war, the newly established, Communist-governed People’s Republic of China coopted the Republic of China’s territorial claim based on its “One China” policy. Many of the other claimants, who were not independent nations when China staked its original claim, would prefer instead for individual territorial claims in the region to be determined by maritime law. Maritime law, in this case the United Nations Convention on Law of the Sea (UNCLOS), grants a nation a territorial sea extending twelve nautical miles out from the island over which they have sovereignty as well as an exclusive economic zone within two hundred nautical miles. Islands and rocks have territorial seas, but improved landmasses and reefs like Subi Reef do not. The United States specifically objects to maritime laws in several of the nations that make territorial claims in the South China Sea. These laws require ships passing through foreign waters to give prior notification to the foreign government, regardless of the nature of the ship’s passage. Under traditional conventions of maritime law, “innocent passages,” like those conducted by US Navy ships during the two FONOPs, do not require notification, so the FONOPs functioned as displays of American opposition to those laws that the United States believe violate freedom of navigation on the high seas. As Josh Earnest, the White House Press Secretary, has put it in past press conferences, “the United States will fly, sail, and operate anywhere that international law allows.” Freedom of navigation is in the interests of the American Navy as well as American commerce. The United States couches its arguments about the Chinese territorial claims as issues of international law, but, curiously enough, the United States has not ratified UNCLOS, the body of international law governing these disputes. According to Christina Lai, a research fellow at Princeton University, Chinese state media has attacked the United States’ position for its hypocrisy, an argument that she argues has some resonance in American policymaking circles—even President Obama has called upon the US Senate to ratify UNCLOS. Although it is not a signatory, the United States still abides by the provisions of UNCLOS as a matter of customary international law, meaning that the United States follows its provisions as a matter of established state practice rather than a codified statute. Thus, while the United States itself is not subject to the legal repercussions of violations of international law, it follows all of the provisions of UNCLOS. According to Graham Webster, a senior