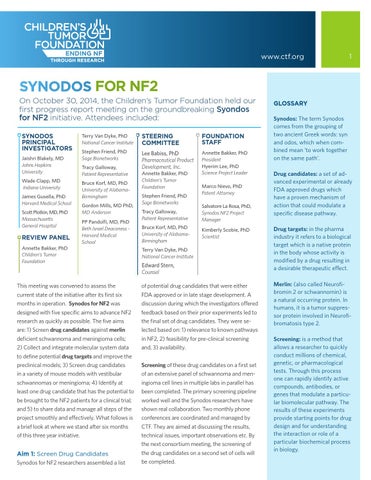 This meeting was convened to assess the current state of the initiative after its first six months in operation. Synodos for NF2 was designed with five specific aims to advance NF2 research as quickly as possible. The five aims are: 1) Screen drug candidates against merlin deficient schwannoma and meningioma cells; 2) Collect and integrate molecular system data to define potential drug targets and improve the preclinical models; 3) Screen drug candidates in a variety of mouse models with vestibular schwannomas or meningioma; 4) Identify at least one drug candidate that has the potential to be brought to the NF2 patients for a clinical trial; and 5) to share data and manage all steps of the project smoothly and effectively. What follows is a brief look at where we stand after six months of this three year initiative. Aim 1: Screen Drug Candidates Synodos for NF2 researchers assembled a list

of potential drug candidates that were either FDA approved or in late stage development. A discussion during which the investigators offered feedback based on their prior experiments led to the final set of drug candidates. They were selected based on: 1) relevance to known pathways in NF2, 2) feasibility for pre-clinical screening and, 3) availability. Screening of these drug candidates on a first set of an extensive panel of schwannoma and meningioma cell lines in multiple labs in parallel has been completed. The primary screening pipeline worked well and the Synodos researchers have shown real collaboration. Two monthly phone conferences are coordinated and managed by CTF. They are aimed at discussing the results, technical issues, important observations etc. By the next consortium meeting, the screening of the drug candidates on a second set of cells will be completed.

GLOSSARY Synodos: The term Synodos comes from the grouping of two ancient Greek words: syn and odos, which when combined mean ‘to work together on the same path’. Drug candidates: a set of advanced experimental or already FDA approved drugs which have a proven mechanism of action that could modulate a specific disease pathway. Drug targets: in the pharma industry it refers to a biological target which is a native protein in the body whose activity is modified by a drug resulting in a desirable therapeutic effect. Merlin: (also called Neurofibromin 2 or schwannomin) is a natural occurring protein. In humans, it is a tumor suppressor protein involved in Neurofibromatosis type 2. Screening: is a method that allows a researcher to quickly conduct millions of chemical, genetic, or pharmacological tests. Through this process one can rapidly identify active compounds, antibodies, or genes that modulate a particular biomolecular pathway. The results of these experiments provide starting points for drug design and for understanding the interaction or role of a particular biochemical process in biology.

AIM 2: Collect and integrate molecular systems data to prioritize existing targets, identify new targets and improve model systems This aim is directed towards the understanding of NF2 at a molecular level. The group will analyze the molecular composition of NF2-affected cell lines and how these cell lines are behaving on treatment with the drug candidates. Nextgeneration sequencing will be employed to analyze those changes. All the data of primary screening (milestone) will be collected by March 2015 and the data analysis (milestone) will be completed by June 2015. After the selection of the single best performing drug candidates, the team will also explore the opportunity to select combinations of the tested drug to maximize the effect of best responders towards selected cell lines. Those will be again characterized by sequencing techniques. Results will guide the selection for the first set of the in vivo testing which will begin in July 2015. All the data generated will likely produce new information on new targets to explore. The group will then decide which specific target to further analyze by developing new cell lines, using state-of-the-art technology to generate new cell lines, validate and characterize them and incorporate those into the NF2 screening cascade.

AIM 3: Screen drug candidates in in vivo models of vestibular schwannoma and meningioma The lab responsible for the execution of Aim 3 has been actively participating in the group discussion and decision making progress to date including in the monthly teleconferences with the entire Synodos team and CTF to discuss (1) the selection of set of advanced clinical stage or approved drug candidates that have rational linkage to merlin-dependent pathways in the clinical pipeline, (2) efficacy of these compounds in NF2-deficient schwannoma and meningioma cells, (3) the preliminary sequencing of cell lines, and (4) Sageâ&#x20AC;&#x2122;s Synapse public expression data on schwannomas and meningiomas. To prepare for the in vivo study various colonies of mice are being maintained and grown at various labs, in order to be ready to start the drug candidate testing. In the next 6 months discussion will continue regarding selection of cell lines and evaluation of the primary screen results across all the cell work. In vivo testing will take place in July-Sept 2015. AIM 4: Identify at least one drug candidate to move forward for clinical trial This is the most significant aim of this project and the culmination of successful execution of Aims 1-3 and 5. We look forward to updating you on this Aim when it is underway. Today we foresee initiation of this aim in July-Sept 2016. AIM 5. Data sharing, dissemination plan and management

Next-generation sequencing (NGS), also known as high-throughput sequencing, is the catch-all term used to describe a number of different modern sequencing technologies. These recent technologies allow us to sequence DNA and RNA much more quickly and cheaply than the previously used, and as such have revolutionized the study of genomics and molecular biology. A Target is anything within a living organism to which some other entity, like an endogenous ligand or a drug is directed and/ or binds. Examples of common classes of biological targets are proteins such as enzymes, ion channels, and receptors. Public expression data: is a collection of biological databases or libraries of life sciences information, collected from scientific experiments, published literature, high-throughput experiment technology, and computational analyses.

Synapse: is the proprietary portal that Sage Bionetworks has established to allow researchers accessing and exchanging data.

Sage Bionetworks support to the Synodos Project: Sage and CTF are supporting the team in their data sharing and project management. Sage is building the necessary tools to analyze the upcoming data and CTF is closely monitoring the progression towards milestones and deliverables, working closely with the researchers. Dr. Salvatore La Rosa, Project Manager for Synodos for NF2, regularly hosts two monthly meetings, one with the researchers and one with the Principal Investigators to coordinate and let the groups share their progresses and talk. An in-person meeting has been also scheduled in January 2015 in Orlando to let the group work together towards the achievement of the first milestone. Sage Bionetworks support to the Synodos for NF2 Project: Sage Bionetworks (www.sagebase.org) and their services have been offered from CTF to the Synodos for NF2 team to help in sharing and disseminating their findings. The Sage team was integrated into Synodos as the repository and the facilitator of data-driven decisions. The aim is to gather all the data in one place and build a series of tools that will facilitate accurate interpretation. Below is a list of what has been achieved in the first six months of the project. 1. Synapse Training We conducted initial Synapse training for the Synodos consortium. The trainings are key at ensuring that all researchers upload their data in the right way. One-on-one specific training sessions were also done with each of the data generating centers to enable data sharing across the groups.

2. Synodos Data Explorer Application (SyDE) To enable seamless data exploration across various datasets generated by the consortium we have built an interaction application named SyDE. The application, which is currently a work-in-progress, will be the center point for data summarization and exploration by Synodos researchers. First alpha version of the application was released on October 10, 2014. 3. Analysis of public expression data We compiled some of the largest publicly available expression datasets for meningioma and schwannoma studies. The raw expression datasets were downloaded, processed, normalized and summarized. The cleaned data is available to Synodos researchers both as files and summarized view available on SyDE.

THE CHILDREN’S TUMOR FOUNDATION HAS DESIGNED SYNODOS TO BREAK THROUGH THE OBSTACLES THAT HAMPER DRUG DISCOVERY IN ORDER TO DELIVER TREATMENTS – AND HOPE – TO NF2 PATIENTS.

THE CHILDREN’S TUMOR FOUNDATION MISSION IS TO: • Drive research toward treatments and a

4. Drug Candidate/Screening Data We have developed a simple pipeline to process and summarize the drug screening data generated across centers. The initial set of drug screen data were analyzed and summarized to enable holistic comparisons across the drugs and cell lines. The same is now available on SyDE.

The Foundation is pleased with these early stage developments and grateful for your support of this critical initiative. Timelines and all dates provided in this document are ALL PROJECTED and therefore highly susceptible to variation due to unforeseen research events.

This first-of-its-kind multidisciplinary collaboration of top scientists from leading institutions was initiated, sponsored, and managed by the Children’s Tumor Foundation, to accelerate development of NF2 treatments.

The Foundation’s detailed plan forges a path of support to every NF stakeholder: researchers, medical centers, bio-industry – and most importantly, NF patients.

The number of registrants in the NF Registry has doubled in the last 15 months. With over 4,500 participants, the NF Registry is attracting increased interest in NF from pharmaceutical companies. To learn more, visit nfregistry.org

NF AWARENESS GROWS ACROSS ALL CHANNELS

The Foundation’s NF Biobank includes the first-ever protocol in place to include post-mortem tissue, thereby increasing our understanding of NF in all its manifestations.

The collaborative setting of the joint NF Forum and NF Conference brought doctors and patients together. A groundbreaking “Business Opportunities in NF” forum attracted significant attention.

In partnership with Sage Bionetworks, the Children’s Tumor Foundation launched the first ever data sharing platform, to provide information in real-time and improve understanding of research across NF.

CTF IN ACTION FOR PATIENTS

Children’s Tumor Foundation expanded its collaborations to accelerate the drug discovery process, as well as relationships with other NF patient organizations. We are all on the same team.

THIS YEAR WAS A BIG WIN IN THE FIGHT AGAINST NF. TOGETHER WITH YOU, 2015 WILL BE EVEN BIGGER.

FIVE THINGS TO LOOK FORWARD TO IN 2015

Launch of Synodos for NF1. With Synodos for NF2 under way, we are bringing that model to NF1. Additionally, launch of biggest OPG (optic pathway glioma) clinical consortium.

You’ll hear a lot about ‘omics’, which is short for fields of study in biology such as genomics and proteomics. CTF will fully characterize all tissue in the NF Biobank, further increasing our knowledge of NF.

New collaborations across NF and across disease areas. 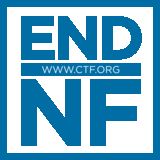 Progress report of the Synodos for NF2 initiative.

Progress report of the Synodos for NF2 initiative.