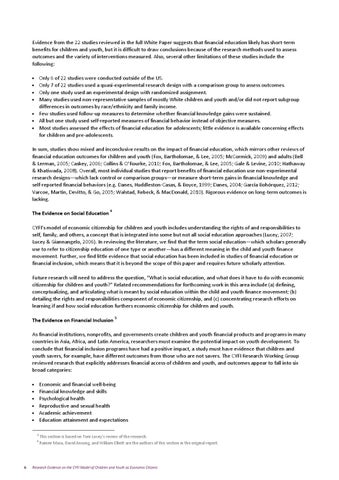 Evidence from the 22 studies reviewed in the full White Paper suggests that financial education likely has short-term benefits for children and youth, but it is difficult to draw conclusions because of the research methods used to assess outcomes and the variety of interventions measured. Also, several other limitations of these studies include the following: 

Only 6 of 22 studies were conducted outside of the US. Only 7 of 22 studies used a quasi-experimental research design with a comparison group to assess outcomes. Only one study used an experimental design with randomized assignment. Many studies used non-representative samples of mostly White children and youth and/or did not report subgroup differences in outcomes by race/ethnicity and family income. Few studies used follow-up measures to determine whether financial knowledge gains were sustained. All but one study used self-reported measures of financial behavior instead of objective measures. Most studies assessed the effects of financial education for adolescents; little evidence is available concerning effects for children and pre-adolescents.

As financial institutions, nonprofits, and governments create children and youth financial products and programs in many countries in Asia, Africa, and Latin America, researchers must examine the potential impact on youth development. To conclude that financial inclusion programs have had a positive impact, a study must have evidence that children and youth savers, for example, have different outcomes from those who are not savers. The CYFI Research Working Group reviewed research that explicitly addresses financial access of children and youth, and outcomes appear to fall into six broad categories: 

This section is based on Tom Lucey’s review of the research. Rainier Masa, David Ansong, and William Elliott are the authors of this section in the original report. 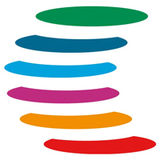 CYFI and the Centre for Social Development (CSD) published two research briefs on the Conceptual Development of the CYFI Model of Children a...

CYFI and the Centre for Social Development (CSD) published two research briefs on the Conceptual Development of the CYFI Model of Children a...