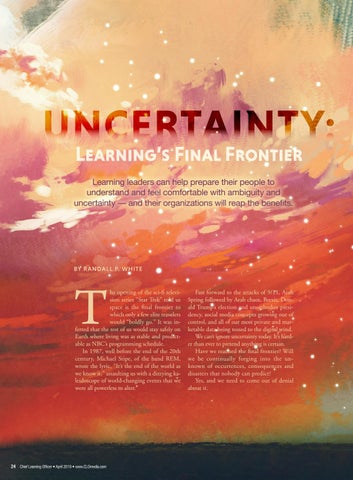 UNCERTAINTY: Learning’s Final Frontier Learning leaders can help prepare their people to understand and feel comfortable with ambiguity and uncertainty — and their organizations will reap the benefits.

he opening of the sci-fi television series “Star Trek” told us space is the final frontier to which only a few elite travelers would “boldly go.” It was inferred that the rest of us would stay safely on Earth where living was as stable and predictable as NBC’s programming schedule. In 1987, well before the end of the 20th century, Michael Stipe, of the band REM, wrote the lyric, “It’s the end of the world as we know it,” assaulting us with a dizzying kaleidoscope of world-changing events that we were all powerless to alter.

Fast forward to the attacks of 9/11, Arab Spring followed by Arab chaos, Brexit, Donald Trump’s election and unorthodox presidency, social media concepts growing out of control, and all of our most private and marketable data being tossed to the digital wind. We can’t ignore uncertainty today. It’s harder than ever to pretend anything is certain. Have we reached the final frontier? Will we be continually forging into the unknown of occurrences, consequences and disasters that nobody can predict? Yes, and we need to come out of denial about it. 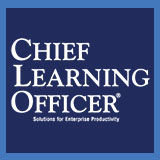