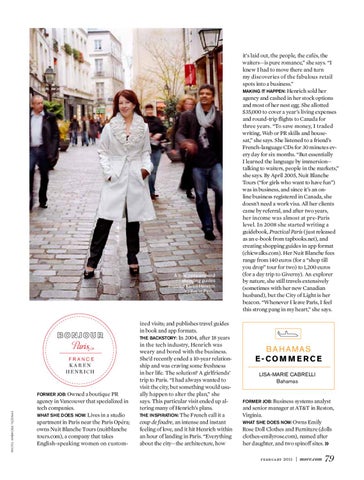 FORMER JOB: Owned a boutique PR agency in Vancouver that specialized in tech companies. WHAT SHE DOES NOW: Lives in a studio apartment in Paris near the Paris Opéra; owns Nuit Blanche Tours (nuitblanche tours.com), a company that takes English-speaking women on custom-

ized visits; and publishes travel guides in book and app formats. THE BACKSTORY: In 2004, after 18 years in the tech industry, Henrich was weary and bored with the business. She’d recently ended a 10-year relationship and was craving some freshness in her life. The solution? A girlfriends’ trip to Paris. “I had always wanted to visit the city, but something would usually happen to alter the plan,” she says. This particular visit ended up altering many of Henrich’s plans. THE INSPIRATION: The French call it a coup de foudre, an intense and instant feeling of love, and it hit Henrich within an hour of landing in Paris. “Everything about the city—the architecture, how

A tour company and shopping guides enabled Karen Henrich to live in Paris.

it’s laid out, the people, the cafés, the waiters—is pure romance,” she says. “I knew I had to move there and turn my discoveries of the fabulous retail spots into a business.” MAKING IT HAPPEN: Henrich sold her agency and cashed in her stock options and most of her nest egg. She allotted $35,000 to cover a year’s living expenses and round-trip flights to Canada for three years. “To save money, I traded writing, Web or PR skills and housesat,” she says. She listened to a friend’s French-language CDs for 30 minutes every day for six months. “But essentially I learned the language by immersion— talking to waiters, people in the markets,” she says. By April 2005, Nuit Blanche Tours (“for girls who want to have fun”) was in business, and since it’s an online business registered in Canada, she doesn’t need a work visa. All her clients came by referral, and after two years, her income was almost at pre-Paris level. In 2008 she started writing a guidebook, Practical Paris ( just released as an e-book from tapbooks.net), and creating shopping guides in app format (chicwalks.com). Her Nuit Blanche fees range from 140 euros (for a “shop till you drop” tour for two) to 1,200 euros (for a day trip to Giverny). An explorer by nature, she still travels extensively (sometimes with her new Canadian husband), but the City of Light is her beacon. “Whenever I leave Paris, I feel this strong pang in my heart,” she says.