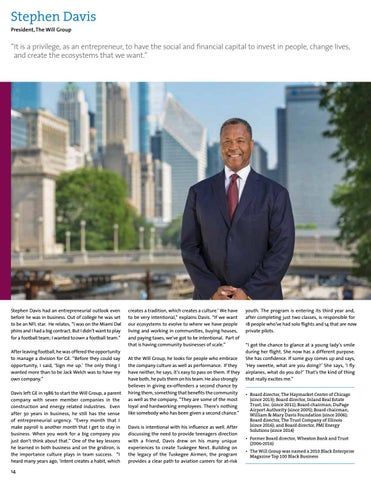 Stephen Davis President, The Will Group

Stephen Davis had an entrepreneurial outlook even before he was in business. Out of college he was set to be an NFL star. He relates, “I was on the Miami Dol phins and I had a big contract. But I didn’t want to play for a football team; I wanted to own a football team.” After leaving football, he was offered the opportunity to manage a division for GE. “Before they could say opportunity, I said, ‘Sign me up.’ The only thing I wanted more than to be Jack Welch was to have my own company.” Davis left GE in 1986 to start the Will Group, a parent company with seven member companies in the construction and energy related industries. Even after 30 years in business, he still has the sense of entrepreneurial urgency. “Every month that I make payroll is another month that I get to stay in business. When you work for a big company you just don’t think about that.” One of the key lessons he learned in both business and on the gridiron, is the importance culture plays in team success. “I heard many years ago, ‘Intent creates a habit, which

creates a tradition, which creates a culture.’ We have to be very intentional,” explains Davis. “If we want our ecosystems to evolve to where we have people living and working in communities, buying houses, and paying taxes, we’ve got to be intentional. Part of that is having community businesses of scale.” At the Will Group, he looks for people who embrace the company culture as well as performance. If they have neither, he says, it’s easy to pass on them. If they have both, he puts them on his team. He also strongly believes in giving ex-offenders a second chance by hiring them, something that beneﬁts the community as well as the company. “They are some of the most loyal and hardworking employees. There’s nothing like somebody who has been given a second chance.” Davis is intentional with his inﬂuence as well. After discussing the need to provide teenagers direction with a friend, Davis drew on his many unique experiences to create Tuskegee Next. Building on the legacy of the Tuskegee Airmen, the program provides a clear path to aviation careers for at-risk

youth. The program is entering its third year and, after completing just two classes, is responsible for 18 people who’ve had solo ﬂights and 14 that are now private pilots. “I got the chance to glance at a young lady’s smile during her ﬂight. She now has a different purpose. She has conﬁdence. If some guy comes up and says, ‘Hey sweetie, what are you doing?’ She says, ‘I ﬂy airplanes, what do you do?’ That’s the kind of thing that really excites me.” •ꢀ Boardꢀdirector,ꢀTheꢀHaymarketꢀCenterꢀofꢀChicagoꢀ (sinceꢀ2013);ꢀBoardꢀdirector,ꢀInlandꢀRealꢀEstateꢀ Trust,ꢀInc.ꢀ(sinceꢀ2011);ꢀBoardꢀchairman,ꢀDuPageꢀ AirportꢀAuthorityꢀ(sinceꢀ2005);ꢀBoardꢀchairman,ꢀ Williamꢀ&amp;ꢀMaryꢀDavisꢀFoundationꢀ(sinceꢀ2006);ꢀ Boardꢀdirector,ꢀTheꢀTrustꢀCompanyꢀofꢀIllinoisꢀ (sinceꢀ2016);ꢀandꢀBoardꢀdirector,ꢀPMIꢀEnergyꢀ Solutionsꢀ(sinceꢀ2014)ꢀ •ꢀ FormerꢀBoardꢀdirector,ꢀWheatonꢀBankꢀandꢀTrustꢀ (2006-2016)ꢀ •ꢀ TheꢀWillꢀGroupꢀwasꢀnamedꢀaꢀ2010ꢀBlackꢀEnterpriseꢀ MagazineꢀTopꢀ100ꢀBlackꢀBusiness 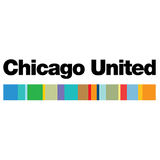