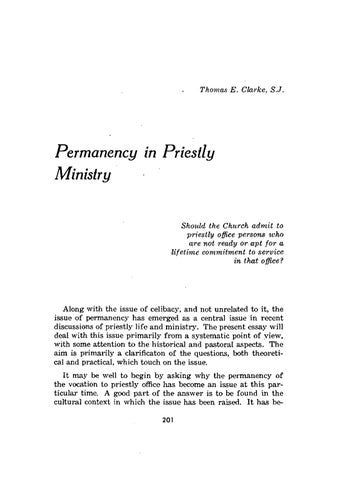 Should the Church admit to priestly office persons who are not ready or apt for a lifetime commitment to service in that office?

Along with the issue of celibacy, and not unrelated to it, the issue of permanency has emerged as a central issue in recent discussions of priestly life and ministry. The present essay will deal with this issue primarily from a systematic point of :view, with some attention to the historical and pastoral aspects. The aim is primarily a clarificaton of the questions, both theoretical and practical, which touch on the issue.

It may be well to begin by asking why the permanency of the vocation to priestly office has become an issue at this particular time. A good part of the answer is to be found in the cultural context in which the issue has been raised. It has be201