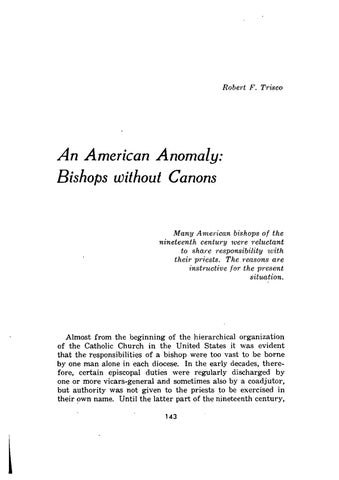 An American Anomaly: Bishops without Canons

Many American bishops of the nineteenth centw路y we1路e reluctant to share responsibility with their priests. The reasons are instnwtive for the p1路esent situation.

Almost from the beginning of the hierarchical organization of the Catholic Church in the United States it was evident that the responsibilities of a bishop were too vast to be borne by one man alone in each diocese. In the early decades, therefore, certain episcopal duties were regularly discharged by one or more vicars-general and sometimes also by a coadjutor, but authority was not given to the priests to be exercised in their own name. Until the latter part of the nineteenth century, 143