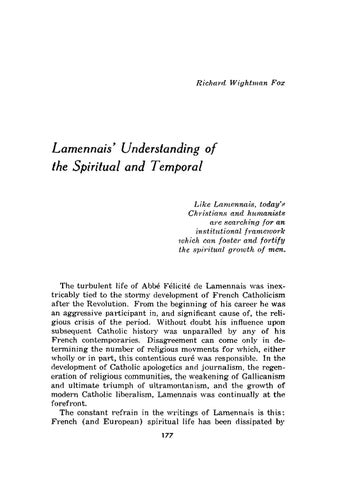 The turbulent !ife of Abbé Félicité de Lamennais was inextricably tied to the sto1my development of French Catholicism after the Revolution. From the beginning of his career he was an aggressive participant in, and significant cause of, the religious crisis of the period. Without doubt hi.s influence upon subsequent Catholic history was unparalled by any of his French contemporaries. Disagreement can come only in determining the number of religious movments for which, either wholly or in pa1t, this contentious curé was responsible. In the development of Catholic apologetics and journalism, the regenm·ation of religious communities, the weakening of Gallicanism and ultimate triumph of ultramontanism, and the growth of modem Catholic liberalism, Lamennais was continually at the forefront. The constant refrain in the writings of Lamennais is this: French (and European) spiritual !ife has been dissipated by 177