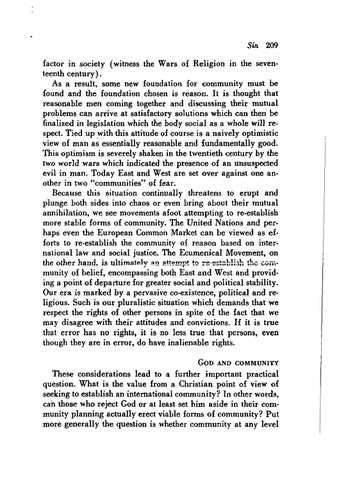 factor in society (witness the Wars of Religion in the seventeenth century). As a result, some new foundation for community must be found and the foundation chosen is reason. It is thought that reasonable men coming together and discussing their mutual problems can arrive at satisfactory solutions which can then be finalized in legislation which the body social as a whole will respect. Tied up with this attitude of course is a naively optimistic view of man as essentially reasonable and fundamentally good. This optimism is severely shaken in the twentieth century by the two world wars which indicated the presence of an unsuspected evil in man. Today East and West are set over against one another in two &quot;communities&quot; of fear. Because this situation continually threatens to erupt and plunge both sides into chaos or even bring about their mutual annihilation, we see movements afoot attempting to re-establish more stable forms of community. The United Nations and perhaps even the European Common Market can be viewed as efforts to re-establish the community of reason based on international law and social justice. The Ecumenical Movement, on the other hand~ is ultimat~ly ~n a!tempt !:~ :-e-e~t~bHsh th0 cvanmunity of belief, encompassing both East and West and providing a point of departure for greater social and political stability. Our era is marked by a pervasive co-existence, political and religious. Such is our pluralistic situation which demands that we respect the rights of other persons in spite of the fact that we may disagree with their attitudes and convictions. If it is true that error has no rights, it is no less true that persons, even though they are in error, do have inalienable rights. GoD AND coMMUNITY

These considerations lead to a further important practical question. What is the value from a Christian point of view of seeking to establish an international community? In other words, can those who reject God or at least set him aside in their community planning actually erect viable forms of community? Put more generally the question is whether community at any level