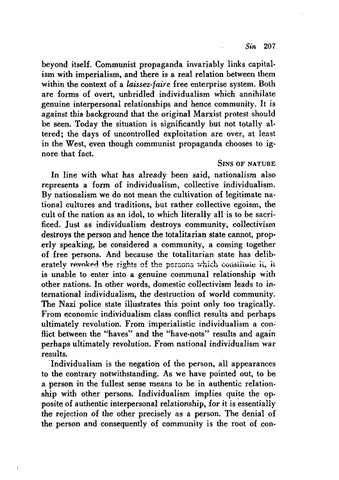 beyond itself. Communist propaganda invariably links capitalism with imperialism, and there is a real relation between them within the context of a laissez-faire free enterprise system. Both are forms of overt, unbridled individualism which annihilate genuine interpersonal relationships and hence community. It is against this background that the original Marxist protest should be seen. Today the situation is significantly but not totally altered; the days of uncontrolled exploitation are over, at least in the West, even though communist propaganda chooses to ignore that fact. SINS OF NATURE

In line with what has already been said, nationalism also represents a form of individualism, collective individualism. By nationalism we do not mean the cultivation of legitimate national cultures and traditions, hut rather collective egoism, the cult of the nation as an idol, to which literally all is to he sacrificed. Just as individualism destroys community, collectivism destroys the person and hence the totalitarian state cannot, propÂˇ erly speaking, he considered a community, a coming together of free persons. And because the totalitarian state has deliberately TP.vnkf:&quot;:d !h~ righte o-! t.l:!e pcr::;cn:; ;;.Âˇhich cviisliluie ii, ii is unable to enter into a genuine communal relationship with other nations. In other words, domestic collectivism leads to international individualism, the destruction of world community. The Nazi police state illustrates this point only too tragically. From economic individualism class conflict results and perhaps ultimately revolution. From imperialistic individualism a con&#39; flict between the &quot;haves&quot; and the &quot;have-nots&quot; results and again perhaps ultimately revolution. From national individualism war results. &quot;Individualism is the negation of the person, all appearances to the contrary notwithstanding. As we have pointed out, to be a person in the fullest sense means to be in authentic relationship with other persons. Individualism implies quite the opposite of authentic interpersonal relationship, for it is essentially the rejection of the other precisely as a person. The denial of the person and consequently of community is the root of con-