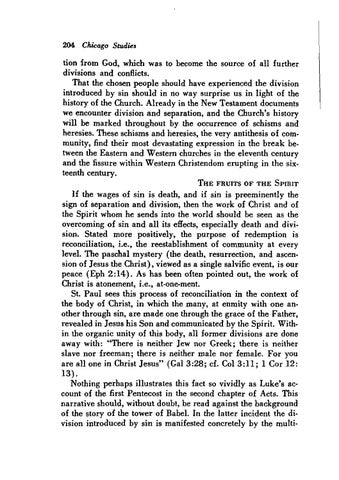 tion from God, which was to become the source of all further divisions and conflicts. That the chosen people should have experienced the division introduced by sin should in no way surprise us in light of the history of the Church. Already in the New Testament documents we encounter division and separation, and the Church&#39;s history will be marked throughout by the occurrence of schisms and heresies. These schisms and heresies, the very antithesis of community, find their most devastating expression in the break hetween the Eastern and Western churches in the eleventh century and the fissure within Western Christendom erupting in the sixteenth century. THE FRUITS OF THE SPIRIT

If the wages of sin is death, and if sin is preeminently the sign of separation and division, then the work of Christ and of the Spirit whom he sends into the world should be seen as the overcoming of sin and all its effects, especially death and division. Stated more positively, the purpose of redemption is reconciliation, i.e., the reestablislunent of community at every level. The paschal mystery (the death, resurrection, and ascension of Jesus the Christ), viewed as a single salvific event, is our peace ( Eph 2:14). As has been often pointed out, the work of Christ is atonement, i.e., at-one-ment. St. Paul sees this process of reconciliation in the context of the body of Christ, in which the many, at enmity with one another through sin, are made one through the grace of the Father, revealed in Jesus his Son and communicated by the Spirit. Within the organic unity of this body, all former divisions are done away with: &quot;There is neither Jew nor Greek; there is neither slave nor freeman; there is neither male nor female. For you are all one in Christ Jesus&quot; (Gal 3:28; cÂŁ. Col 3:11; 1 Cor 12: 13). Nothing perhaps illustrates this fact so vividly as Luke&#39;s account of the first Pentecost in the second chapter of Acts. This narrative should, without doubt, be read against the background of the story of the tower of Babel. In the latter incident the division introduced by sin is manifested concretely by the multi-