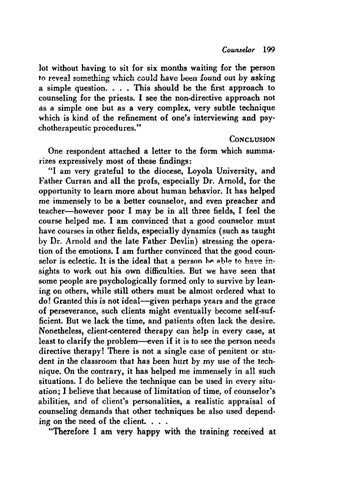 lot without having to sit for six months waiting for the person to r.evea! something l~·hich could have Lt:t;n found out by asking a simple question. • . . This should be the first approach to counseling for the priests. I see the non-directive approach not as a simple one but as a very complex, very subtle technique which is kind of the refinement of one&#39;s interviewing and psychotherapeutic procedures.&quot; CoNCLUSION

One respondent attached a letter to the form which summarizes expressively most of these findings: &quot;I am very grateful to the diocese, Loyola University, and Father Curran and all the profs, especially Dr. Arnold, for the opportunity to learn more about human behavior. It has helped me immensely to be a better counselor, and even preacher and teacher-however poor I may be in all three fields, I feel the course helped me. I am convinced that a good counselor must have course• in other fields, especially dynamics (such as taught by Dr. Arnold and the late Father Devlin) stressing the operation of the emotions. I am further convinced that the good counselor is eclectic. It is the ideal that a person h,. Rbl~ to:- h!!ve i!!sights to work out his own difficulties. But we have seen that some people are psychologically formed only to survive by leaning on others, while still others must be almost ordered what to do! Granted this is not ideal-given perhaps years and the grace of perseverance, such clients might eventually become self-sufficient. But we lack the time, and patients often lack the desire. Nonetheless, client-centered therapy can help in every case, at least to clarify the problem--even if it is to see the person needs directive therapy! There is not a single case of penitent or stu· dent in the classroom that has been hurt by my use of the technique. On the contrary, it has helped me immensely in all such situations. I do believe the technique can be used in every situ· ation; I believe that because of limitation of time, of counselor&#39;s abilities, and of client&#39;s personalities, a realistic appraisal of counseling demands that other techniques be also used depending on the need of the client. . . . &quot;Therefore I am very happy with the training received at