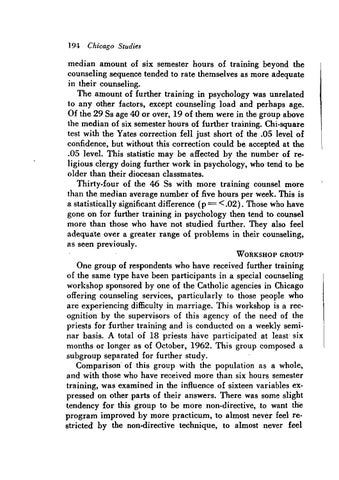 median amount of six semester hours of training beyond the counseling sequence tended to rate themselves as more adequate in their counseling. The amount of further training in psychology was unrelated to any other factors, except counseling load and perhaps age. Of the 29 Ss age 40 or over, 19 of them were in the group above the median of six semester hours of further training. Chi-square test with the Yales correction fell just short of the .05 level of confidence, but without this correction could be accepted at the .05 level. This statistic may be affected by the number of religious clergy doing further work in psychology, who tend to be older than their diocesan classmates. Thirty-four of the 46 Ss with more trammg counsel more than the median average number of five hours per week. This is a statistically significant difference (p = &lt;.02). Those who have gone on for further training in psychology then tend to counsel more than those who have not studied further. They also feel adequate over a greater range of problems in their counseling, as seen previously. WoRKSHOP GROUP

One group of respondents who have received further training of the same type have been participants in a special counseling workshop sponsored by one of the Catholic agencies in Chicago offering counseling services, particularly to those people who are experiencing difficulty in marriage. This workshop is a recognition by the supervisors of this agency of the need of the priests for further training and is conducted on a weekly seminar basis. A total of 18 priests have participated at least· six months or longer as of October, 1962. This group composed a subgroup separated for further study. Comparison· of this group with the population as a whole, and with those who have received more than six hours semester training, was examined in the influence of sixteen variables expressed on other parts of their answers. There was some slight tendency for this group to be more non-directive, to want the program improved by more practicum, to almost never feel restricted by the non•directive technique, to almost never feel