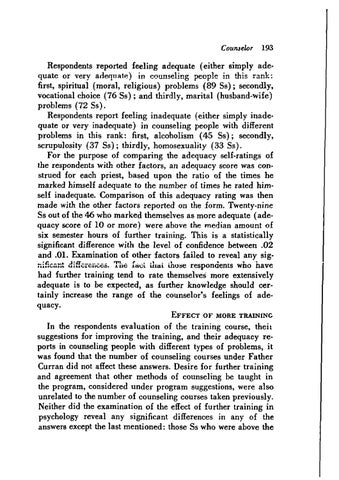 Respondents reported feeling adequate (either simply ade· quate or very adequate) in counseling people in this rank: first, spiritual (moral, religious) problems (89 Ss); secondly, vocational choice (76 Ss); and thirdly, marital (husband-wife) problems (72 Ss). Respondents report feeling inadequate (either simply inade· quate or very inadequate) in counseling people with different problems in this rank: first, alcoholism ( 45 Ss) ; secondly, scrupulosity (37 Ss); thirdly, homosexuality (33 Ss). For the purpose of comparing the adequacy self-ratings of the respondents with other factors, an adequacy score was construed for each priest, based upon the ratio of the times he marked himself adequate to the number of times he rated him· self inadequate. Comparison of this adequacy rating was then made with the other factors reported on the form. Twenty-nine Ss out of the 46 who marked themselves as more adequate ( adequacy score of 10 or more) were above the median amount of six semester hours of further training. This is a statistically significant difference with the level of confidence between .02 and .Ol. Examination of other factors failed to reveal any sig· &#39;l: .. .J•.a ., I&#39; • ·&#39; • • U:i.uCU4io. uju~i&quot;G:U.C..S.:i. ..L U6 ..Lti.(a UU:ll. lflO~e responaentS WtlO tlave had further training tend to rate themselves more extensively adequate is to be expected, as further knowledge should cer· tainly increase the range of the counselor&#39;s feelings of ade· quacy. 1

In the respondents evaluation of the training course, thei 1 suggestions for improving the training, and their adequacy re· ports in counseling people with different types of problems, it was found that the number of counseling courses under Father Curran did not affect these answers. Desire for further training and agreement that other methods of counseling be taught in the program, considered under program suggestions, were also unrelated to the number of counseling courses taken previously. Neither did the examination of the effect of further training in psychology reveal any significant differences in any of the answers except the last mentioned: those Ss who were above the