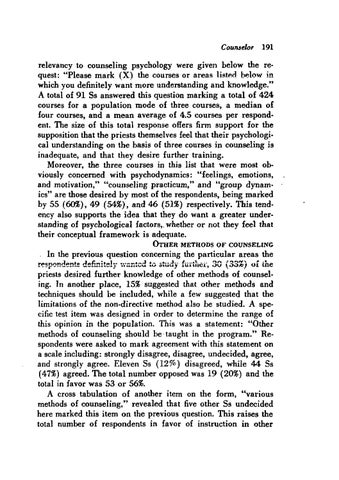 relevancy to counseling psychology were given below the request: &quot;Please mark (X) the courses or areas listP.d below in which you definitely w~ni more understanding and knowledge.&quot; A total of 91 Ss answered this question marking a total of 424 courses for a population mode of three courses, a median of four courses, and a mean average of 4.5 courses per respondent. The size of this total response offers firm support for the supposition that the priests themselves feel that their psychological understanding on the basis of three courses in counseling is inadequate, and that they desire further training. Moreover, the three courses in this list that were most obviously concerned with psychodynamics: &quot;feelings, emotions, and motivation,&quot; &quot;counseling practicum,&quot; and &quot;group dynamics&quot; are those desired by most of the respondents, being marked by 55 (60%), 49 (54%), and 46 (51%) respectively. This tendency also supports the idea that they do want a greater understanding of psychological factors,. whether or not they feel that their conceptual framework is adequate. OTHER METHODS OF COUNSELING