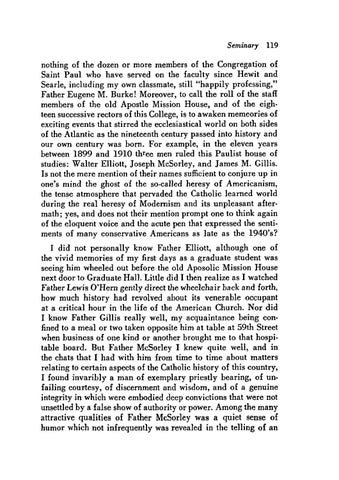 nothing of the dozen or more members of the Congregation of Saint Paul who have served on the faculty since Hewit and Searle, including my own classmate, still &quot;happily professing,&quot; Father Eugene M. Burke! Moreover, to call the roll of the staff members of the old Apostle Mission House, and of the eighÂˇ teen successive rectors of this College, is to awaken memeories of exciting events that stirred the ecclesiastical world on both sides of the Atlantic as the nineteenth century passed into history and our own century was born. For example, in the eleven years between 1899 and 1910 three men ruled this Paulist house of studies: Walter Elliott, Joseph McSorley, and James M. Gillis. Is not the mere mention of their names sufficient to conjure up in one&#39;s mind the ghost of the so-called heresy of Americanism, the tense atmosphere that pervaded the Catholic learned world during the real heresy of Modernism and its unpleasant afterÂˇ math; yes, and does not their mention prompt one to think again of the eloquent voice and the acute pen that expressed the sentiments of many conservative Americans as late as the 1940&#39;s? I did not personally know Father Elliott, although one of the vivid memories of my first days as a graduate student was seeing him wheeled out before the old Aposolic Mission House next door to Graduate Hall. Little did I then realize as I watched Father Lewis O&#39;Hern gently direct the wheelchair back and forth, how much history had revolved about its venerable occupant at a critical hour in the life of the American Church. Nor did I know Father Gillis really well, my acquaintance being confined to a meal or two taken opposite him at table at 59th Street when business of one kind or another brought me to that hospitable board. But Father McSorley I knew quite well, and in the chats that I had with him from time to time about matters relating to certain aspects of the Catholic history of this country, I found invaribly a man of exemplary priestly bearing, of unfailing courtesy, of discernment and wisdom, and of a genuine integrity in which were embodied deep convictions that were not unsettled by a false show of authority or power. Among the many attractive qualities of Father McSorley was a quiet sense of humor which not infrequently was revealed in the telling of an