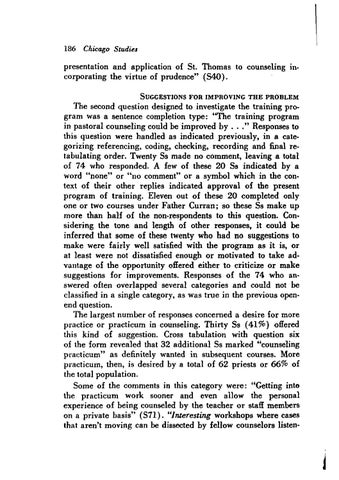 presentation and application of St. Thomas to counseling mÂˇ corporating the virtue of prudence&quot; (540). SUGGESTIONS FOR IMPROVING THE PROBLEM

The second question designed to investigate the training program was a sentence completion type: &quot;The training program in pastoral counseling could be improved by ... &quot; Responses to this question were handled as indicated previously, in a categorizing referencing, coding, checking, recording and final retabulating order. Twenty Ss made no comment, leaving a total of 74 who responded. A few of these 20 Ss indicated by a word &quot;none&quot; or &quot;no comment&quot; or a symbol which in the context of their other replies indicated approval of the present program of training. Eleven out of these 20 completed only one or two courses under Father Curran; so these Ss make up more than half of the non-respondents to this question. Considering the tone and length of other responses, it could he inferred that some of these twenty who had no suggestions to make were fairly well satisfied with the program as it is, or at least were not dissatisfied enough or motivated to take advantage of the opportunity offered either to criticize or make suggestions for improvements. Responses of the 74 who answered often overlapped several categories and could not be classified in a single category, as was true in the previous openend question. The largest number of responses concerned a desire for more practice or practicum in counseling. Thirty Ss ( 41%) offered this kind of suggestion. Cross tabulation with question six of the form revealed that 32 additional Ss marked &quot;counseling practicum&quot; as definitely wanted in subsequent courses. More practicum, then, is desired by a total of 62 priests or 66% of the total population. Some of the comments in this category were: &quot;Getting into the practicum work sooner and even allow the personal experience of being counseled by the teacher or staff members on a private basis&quot; (571). &quot;Interesting workshops where cases that aren&#39;t moving can be dissected by fellow counselors listen-