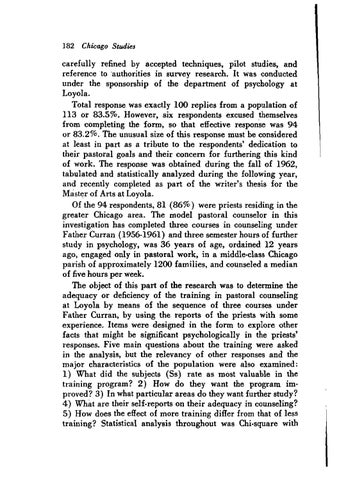 carefully refined by accepted techniques, pilot studies, and reference to Âˇauthorities in survey research. It was conducted under the sponsorship of the department of psychology at Loyola. Total response was exactly 100 replies from a population of 113 or 83.5&#39;fo. However, six respondents excused themselves from completing the form, so that effective response was 94 or 83.2%. The unusual size of this response must be considered at least in part as a tribute to the respondents&#39; dedication to their pastoral goals and their concern for furthering this kind of work. The response was obtained during the fall of 1962, tabulated and statistically analyzed during the following year, and recently completed as part of the writer&#39;s thesis for the Master of Arts at Loyola. Of the 94 respondents, 81 (86%) were priests residing in the greater Chicago area. The model pastoral counselor in this investigation has completed three courses in counseling under Father Curran (1956-1961) and three semester hours of further study in psychology, was 36 years of age, ordained 12 years ago, engaged only in pastoral work, in a middle-class Chicago parish of approximately 1200 families, and counseled a median of five hours per week. The object of this part of the research was to determine the adequacy or deficiency of the training in pastoral counseling at Loyola by means of the sequence of three courses under Father Curran, by using the reports of the priests with some experience. Items were designed in the form to explore other facts that might be significant psychologically in the priests&#39; responses. Five main questions about the training were asked in the analysis, but the relevancy of other responses and the major characteristics of the population were also examined; 1) What did the subjects (Ss) rate as most valuable in the training program? 2) How do they want the program imÂˇ proved? 3) In what particular areas do they want further study? 4) What are their self-reports on their adequacy in counseling? 5) How does the effect of more training differ from that of less training? Statistical analysis throughout was Chi-square with