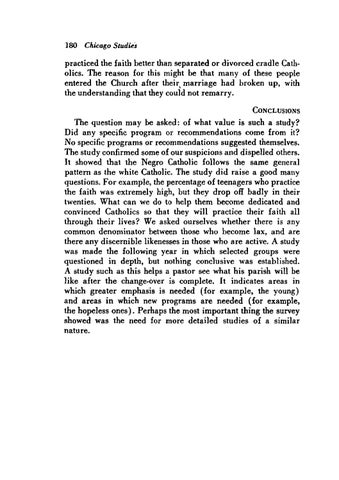 practiced the faith better than separated or divorced cradle Catholics. The reason for this might be that many of these people entered the Church after their, marriage had broken up, with the understanding that they could not remarry. CoNCLUSIONs The question may be asked: of what value is such a study? Did any specific program or recommendations come from it? No specific programs or recommendations suggested themselves. The study confirmed some of our suspicions and dispelled others. It showed that the Negro Catholic follows the same general pattern as the white Catholic. The study did raise a good many questions. For example, the percentage of teenagers who practice the faith was extremely high, but they drop off badly in their twenties. What can we do to help them become dedicated and convinced Catholics so that they will practice their faith all through their lives? We asked ourselves whether there is any common denominator between those who become lax, and are there any discernible likenesses in those who are active. A study was made the following year in which selected groups were questioned in depth, but nothing conclusive was established. A study such as this helps a pastor see what his parish will he like after the change-over is complete. It indicates areas in which greater emphasis is needed (for example, the young) and areas in which new programs are needed (for example, the hopeless ones). Perhaps the most important thing the survey showed was the need for more detailed studies of a similar nature.