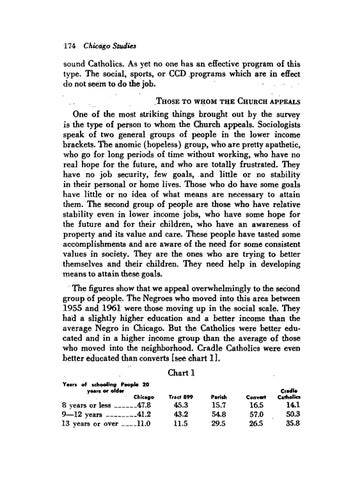 sound Catholics. As yet no one has an effective program of this type. The social, sports, or CCD .programs which are in effect do not seem to do the job• .THOSE TO WHOM THE CHURCH APPEALS

One of the most striking things brought out by the survey is the type of person to whom the Church appeals. Sociologists speak of two general groups of people in the lower income brackets. The anomie (hopeless) group, who are pretty apathetic, who go for. long periods of time without working, who have no real hope for the future, and who are totally frustrated. They have no job security, few goals, .and little or no stability in their personal or home lives. Those who do have some goals have little or no idea of what means are necessary to attain them. The second group of people are those who have relative stability even in lower income jobs, who have some hope for the future and for their children, who have an awareness of property and its value and care. These people have tasted some accomplishments and are aware of the need for some consistent values in society. They are the ones who are trying to better themselves and their children. They need help in developing means to attain these goals. · The figures show that we appeal overwhelmingly to the second group of people. The Negroes who moved into this area between 1955 and 1961 were those moving up in the soCial scale. They had a slightly higher education and a better income than the average Negro in Chicago. But the Catholics were better educated and in a higher income group than the average of those who moved into the neighborhood. Cradle Catholics were even better educated than converts [see chart 1). Chart 1 Years of schooling Peop&amp;e 20 years or old• Chicago