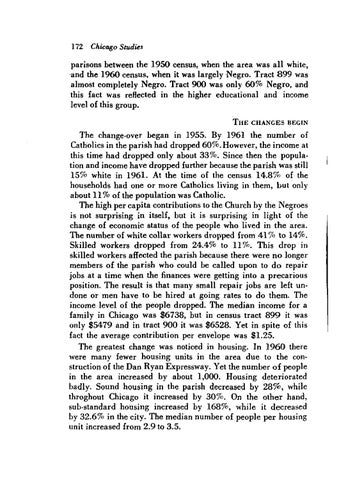 The change-over began in 1955. By 1961 the number of Catholics in the parish had dropped 60%. However, the income at this time had dropped only about 33%. Since then the population and income have dropped further because the parish was still 15% white in 1961. At the time of the census 14.8% of the households had one or more Catholics living in them, but only about ll% of the population was Catholic. The high per capita contributions to the Church by the Negroes is not surprising in itself, but it is surprising in light of the change of economic status of the people who lived in the area. The number of white collar workers dropped from 4l7o to 14%. Skilled workers dropped from 24.4% to ll %. This drop in skilled workers affected the parish because there were no longer members of the parish who could be called upon to do repair jobs at a time when the finances were getting into a precarious position. The result is that many small repair jobs are left unÂˇ done or men have to be hired at going rates to do them. The income level of the people dropped. The median income for a family in Chicago was $6738, but in census tract 899 it was only $5479 and in tract 900 it was $6528. Yet in spite of this fact the average contribution per envelope was $1.25. The greatest change was noticed in housing. In 1960 there were many fewer housing units in the area due to the construction of the Dan Ryan Expressway. Yet the number of people in the area increased by about 1,000. Housing deteriorated badly. Sound housing in the parish decreased by 28%, while throghout Chicago it increased by 30%. On the other hand, sub-standard housing increased by 168%, while it decreased by 32.6% in the city. The median number of people per housing unit increased from 2.9 to 3.5.