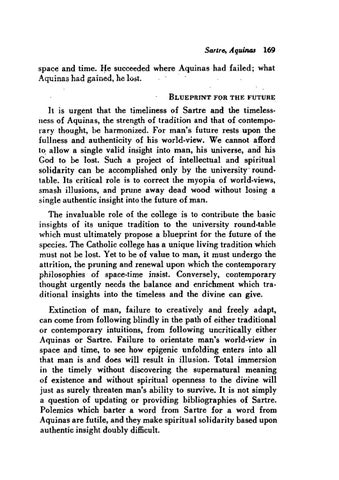 BLUEPRINT FOR THE FUTURE

It is urgent that the timeliness of Sartre and the timelessness of Aquinas, the strength of tradition and that of contempo· rary thought, be harmonized. For man&#39;s future rests upon the fullness and authenticity of his world-view. We cannot afford to allow a single valid insight into man, his universe, and his God to be lost. Such a project of intellectual and spiritual solidarity can be accomplished only by the university&#39; roundtable. Its critical role is to correct the myopia of world-views, smash illusions, and prune away dead wood without losing a single authentic insight into the future of man. The invaluable role of the college is to contribute the basic insights of its unique tradition to the university round-table which must ultimately propose a blueprint for the future of the species. The Catholic college has a unique living tradition which must not be lost. Yet to be of value to man, it must undergo the attrition, the pruning and renewal upon which the contemporary philosophies of space-time insist. Conversely, contemporary thought urgently needs the balance and enrichment which traditional insights into the timeless and the divine can give. Extinction of man, failure to creatively and freely adapt, can come from following blindly in the path of either traditional or contemporary intuitions, from following uncritically either Aquinas or Sartre. Failure to orientate man&#39;s world-view in space and time, to see how epigenic unfolding enters into all that man is and does will result in illusion. Total immersion in the timely without discovering the supernatural meaning of existence and without spiritual openness to the divine will just as surely threaten man&#39;s ability to survive. It is not simply a question of updating or providing bibliographies of Sartre. Polemics which barter a word from Sartre for a word from Aquinas are futile, and they make spiritual solidarity based upon authentic insight doubly difficult.