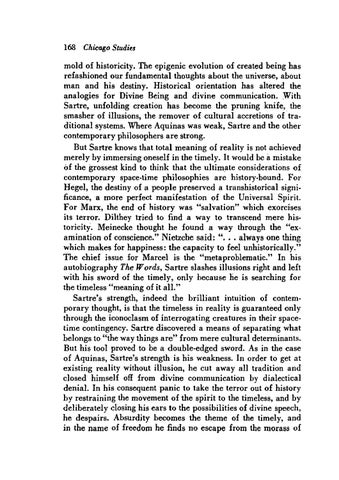 mold of historicity. The epigenic evolution of created being has refashioned our fundamental thoughts about the universe, about man and his destiny. Historical orientation has altered the analogies for Divine Being and divine communication. With Sartre, unfolding creation has become the pruning knife,. the smasher of illusions, the remover of cultural accretions of traditional systems. Where Aquinas was weak, Sartre and the other contemporary philosophers are strong. But Sartre knows that total meaning of reality is not achieved merely by immersing oneself in the timely. It would be a mistake of the grossest kind to think that the ultimate considerations of contemporary space-time philosophies are history-bound. For Hegel, the destiny of a people preserved a transhistorical significance, a more perfect manifestation of the Universal Spirit. For Marx, the end of history was &quot;salvation&quot; which exorcises its terror. Dilthey tried to find a way to transcend mere historicity. Meinecke thought he found a way through the &quot;examination of conscience.&quot; Nietzche said: &quot; .â&amp;#x20AC;˘â&amp;#x20AC;˘ always one thing which makes for happiness: the capacity to feel unhistorically.&quot; The chief issue for Marcel is the &quot;metaproblematic.&quot; In his autobiography The Words, Sartre slashes illusions right and left with his sword of the timely, only because he is searching for the timeless &quot;meaning of it all.&quot; Sartre&#39;s strength, indeed the brilliant intuition of contemporary thought, is that the timeless in reality is guaranteed only through the iconoclasm of interrogating creatures in their spacetime contingency. Sartre discovered a means of separating what belongs to &quot;the way things are&quot; from mere cultural determinants. But his tool proved to be a double-edged sword. As in the case of Aquinas, Sartre&#39;s strength is his weakness. In order to get at existing reality without illusion, he cut away all tradition and closed himself off from divine communication by dialectical denial. In his consequent panic to take the terror out of history by restraining the movement of the spirit to the timeless, and by deliberate! y closing his ears to the possibilities of divine speech, he despairs. Absurdity becomes the theme of the timely, and in the name of freedom he finds no escape from the morass of