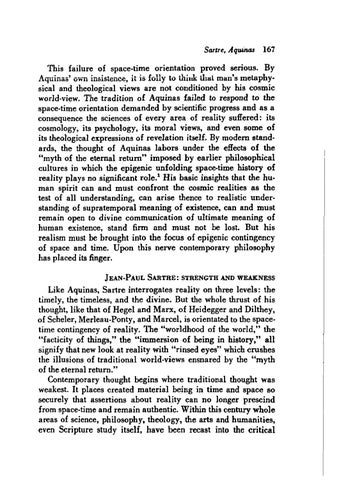 Sartre, Aquina.t 167 This failure of space-time orientation proved serious. By Aquinas&#39; on&quot;Il insistence, it is fully to thiuk i.l1ui man&#39;s metaphyÂˇ sica! and theological views are not conditioned by his cosmic world-view. The tradition of Aquinas failed to respond to the space-time orientation demanded by scientific progress and as a consequence the sciences of every area of reality suffered: its cosmology, its psychology, its moral views, and even some of its theological expressions of revelation itself. By modem standards, the thought of Aquinas labors under the effects of the &quot;myth of the eternal return&quot; imposed by earlier philosophical cultures in which the epigenic unfolding space-time history of reality plays no significant role! His basic insights that the human spirit can and must confront the cosmic realities as the test of all understanding, can arise thence to realistic understanding of supratemporal meaning of existence, can and must remain open to divine communication of ultimate meaning of human existence, stand firm nnd must not be lost. But his realism must be brought into the focus of epigenic contingency of space and time. Upon this nerve contemporary philosophy has placed its :finger. JEAN-PAUL 5ARTRE: STRENGTH AND WEAKNESS

Like Aquinas, Sartre interrogates reality on three levels: the timely, the timeless, and the divine. But the whole thrust of his thought, like that of Hegel and Marx, of Heidegger and Dilthey, of Scheler, Merleau-Ponty, and Marcel, is orientated to the spacetime contingency of reality. The &quot;worldhood of the world,&quot; the &quot;facticity of things,&quot; the &quot;immersion of being in history,&quot; all signify that new look at reality with &quot;rinsed eyes&quot; which crushes the illusions of traditional world-views ensnared by the &quot;myth of the eternal return.&quot; Contemporary thought begins where traditional thought was weakest. It places created material being in time and space so securely that assertions about reality can no longer prescind from space-time and remain authentic. Within this century whole areas of science, philosophy, theology, the arta and humanities, even Scripture study itself, have been recast into the critical