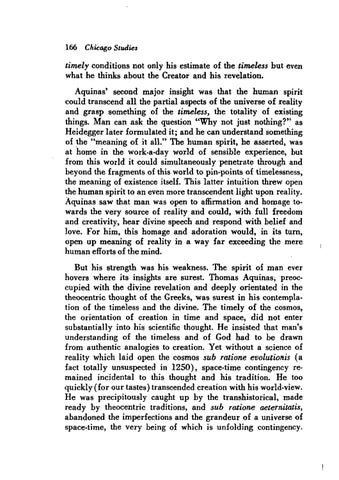 timely conditions not only his estimate of the timeless but even what he thinks about the Creator and his revelation. Aquinas&#39; second major insight was that the human spirit could transcend all the partial aspects of the universe of reality and grasp something of the timeless, the totality of existing things. Man can ask the question &quot;Why not just nothing?&quot; as Heidegger later formulated it; and he can understand something of the &quot;meaning of it all.&quot; The human spirit, he asserted, was at home in the work-a-day world of sensible experience, but from this world it could simultaneously penetrate through and beyond the fragments of this world to pin-points of timelessness, the meaning of existence itself. This latter intuition threw open the human spirit to an even more transcendent light upon reality. Aquinas saw that man was open to affirmation and homage towards the very source of reality and could, with full freedom and creativity, hear divine speech and respond with belief and love. For him, this homage and adoration would, in its turn, open up meaning of reality in a way far exceeding the mere human efforts of the mind. But his strength was his weakness. The spirit of man ever hovers where its insights are surest. Thomas Aquinas; preoccupied with the divine revelation and deeply orientated in the theocentric thought of the Greeks, was surest in his contemplation of the timeless and the divine. The timely of the cosmos, the orientation of creation in time and space, did not enter substantially into his scientific thought. He insisted that man&#39;s understanding of the timeless and of God had to he drawn from authentic analogies to creation. Yet without a science of reality which laid open the cosmos sub ratione evolutionis (a fact totally unsuspected in 1250), space-time contingency remained incidental to this thought and his tradition. He too quickly (for our tastes) transcended creation with his world-view. He was precipitously caught up by the transhistorical, made ready by theocentric traditions, and sub ratione aeternitatis, abandoned the imperfections and the grandeur of a universe of space-time, the very being of which is unfolding contingency.