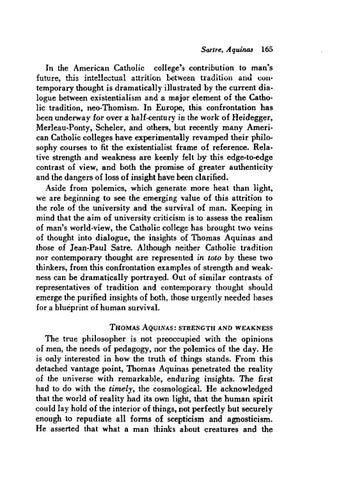 In the American Catholic college&#39;s contribution to man&#39;s future, this intellectual attrition between tradition anJ cun~ temporary thought is dramatically illustrated by the current dialogue between existentialism and a major element of the Catholic tradition, neo-Thomism. In Europe, this confrontation has been underway for over a half-century in the work of Heidegger, Merleau-Ponty, Scheler, and others, but recently many American Catholic colleges have experimentally revamped their philosophy courses to fit the existentialist frame of reference. Relative strength and weakness are keenly felt by this edge-to-edge contrast of view, and both the promise of greater authenticity and the dangers of loss of insight have been clarified. Aside from polemics, which generate more heat than light, we are beginning to see the emerging value of this attrition to the role of the university and the survival of man. Keeping in mind that the aim of university criticism is to assess the realism of man&#39;s world-view, the Catholic college has brought two veins of thought into dialogue, the insights of Thomas Aquinas and those of Jean-Paul Satre. Although neither Catholic tradition nor contemporary thought are represented in toto by these two thinkers, from this confrontation examples of strength and weakness can be dramatically portrayed. Out of similar contrasts of representatives of tradition and contemporary thought should emerge the purified insights of both, those urgently needed bases for a blueprint of human survival THOMAS AQUINAS: STRENGTH AND WEAKNESS

The true philosopher is not preoccupied with the opinions of men, the needs of pedagogy, nor the polemics of the day. He is only interested in how the truth of things stands. From this detached vantage point, Thomas Aquinas penetrated the reality of the universe with remarkable, enduring insights. The first had to do with the timely, the cosmological. He acknowledged that the world of reality had its own light, that the human spirit could lay hold of the interior of things, not perfectly but securely enough to repudiate all forms of scepticism and agnosticism. He asserted that what a man thinks about creatures and the