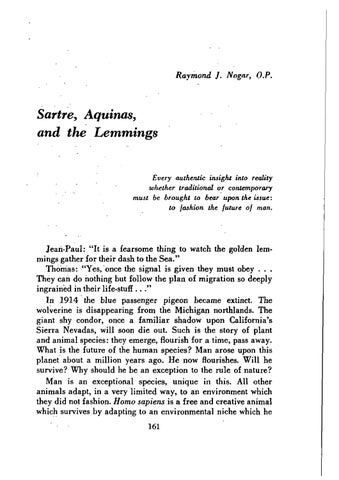 Sartre, Aquinas, and the Lemmings

Every authentic insight into reality whether traditional or conlemporary muse be brought eo bear upon the issue: lo fashion the future of man.

Jean-Paul: &quot;It is a fearsome thing to watch the golden !emÂˇ mings gather for their dash to the Sea.&quot; Thomas: &quot;Yes,Âˇ once the signal is given they must obey . . . They can do nothing but follow the plan of migration so deeply ingrained in their life-stuff ...&quot; In 1914. the blue passenger pigeon became extinct. The wolverine is disappearing from the Michigan northlands. The giant shy condor, once a familiar shadow upon California&#39;s Sierra Nevadas, will soon die out. Such is the story of plant and animal species: they emerge, flourish for a time, pass away. What is the future of the human species? Man arose upon this planet about a million years ago. He now flourishes. Will he survive? Why should he be an exception to the rule of nature? Man is an exceptional species, unique in this. All other animals adapt, in a very limited way, to an environment which they did not fashion. Homo sapiens is a free and creative animal which survives by adapting to an environmental niche which he 161