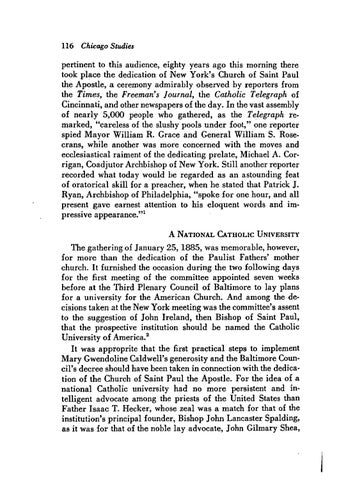 pertinent to this audience, eighty years ago this morning there took place the dedication of New York&#39;s Church of Saint Paul the Apostle, a ceremony admirably observed by reporters from the Times, the Freeman&#39;s Journal, the Catholic Telegraph of Cincinnati, and other newspapers of the day. In the vast assembly of nearly 5,000 people who gathered, as the Telegraph remarked, &quot;careless of the slushy pools under foot,&quot; one reporter spied Mayor William R. Grace and General William S. Rosecrans, while another was more concerned with the moves and ecclesiastical raiment of the dedicating prelate, Michael A. Corrigan, Coadjutor Archbishop of New York. Still another reporter recorded what today would be regarded as an astounding feat of oratorical skill for a preacher, when he stated that Patrick J. Ryan, Archbishop of Philadelphia, &quot;spoke for one hour, and all present gave earnest attention to his eloquent words and impressive appearance.&quot;&#39;

The gathering of January 25, 1885, was memorable, however, for more than the dedication of the Paulist Fathers&#39; mother church. It furnished the occasion during the two following days for the first meeting of the committee appointed seven weeks before at the Third Plenary Council of Baltimore to lay plans for a university for the American Church. And among the decisions taken at the New York meeting was the committee&#39;s assent to the suggestion of John Ireland, then Bishop of Saint Paul, that the prospective institution should be named the Catholic University of America. 2 It was approprite that the first practical steps to implement Mary Gwendoline Caldwell&#39;s generosity and the Baltimore Council&#39;s decree should have been taken in connection with the dedication of the Church of Saint Paul the Apostle. For the idea of a national Catholic university had no more persistent and intelligent advocate among the priests of the United States than Father Isaac T. Hecker, whose zeal was a match for that of the institution&#39;s principal founder, Bishop John Lancaster Spalding, as it was for that of the noble lay advocate, John Gilmary Shea,