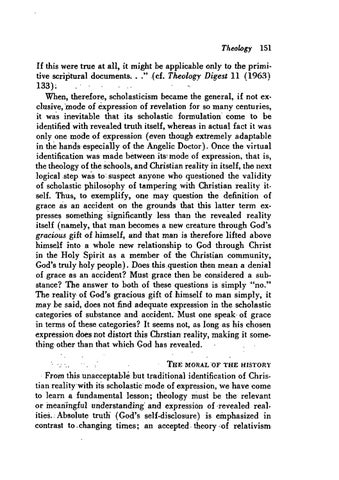 If this were true at all, it might he applicable only to the pr:imi· tive scriptural documents... &quot; .(c£. Theology Digest 11 (1963) 133); When, therefore, scholasticism became the general, if not ex· elusive, &#39;mode of expression of revelation for so many centuries, it wa&#39;s inevitable that its scholastic formulation· come to be identified with revealed truth itself, whereas in actual fact it was only one mode of expression (even though extremely adaptable in the hands especially of the Angelic Doctor). Once the virtual identification was made between its: mode of expression, that is, the theology of the schools, and Christian reality in itself, the next logical .step was to: suspect anyone who questioned the validity of scholastic philosOphy of tampering with Christian reality itself. Thus, to exemplify, one may question the definition of grace as an accident on the grounds that this latter term expresses something significantly less than the revealed reality itself (namely, that man becomes a new creature through God&#39;s gracious gift of himself, and that man is therefore lifted above himself into a whole new relationship to God through Christ in the Holy Spirit as a member of the Christian community, God&#39;s truly holy people). Does this question then mean a denial of grace as an accident? Must grace then be considered a substance? The answer to both of these questions is simply &quot;no.&quot; The reality of God&#39;s gracious gift of himself to man simply, it may be said, does not find adequate expression in the scholastic categories of substance and accident.· Must one speak of grace in terms of these categories? It seems not, as long as his chosen expression does not distort this Chrstian reality, making it something other than that which God has revealed. THE MOl!AL &#39;OF THE HISTORY

· From this unacceptable but traditional identification of Christian reality·with its scholastic· mode of expression, we have come to learn a fundamental lesson; theology musi be the relevant or ineariingful understanding· and expression of ·revealed rea]. ities .. Absolute trutli (God&#39;s self-disclosure) is emphasized in contrast to .changing times; an accepted. theory ·:of relativism