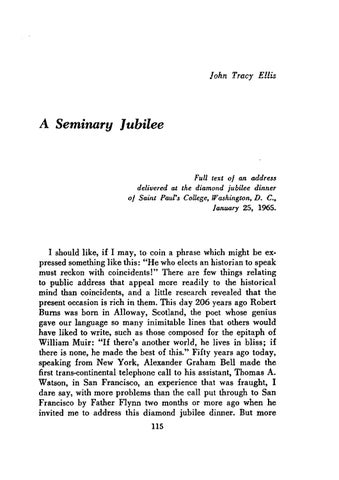 I should like, if I may, to coin a phrase which might be expressed something like this: &quot;He who elects an historian to speak must reckon with coincidents!&quot; There are few things relating to public address that appeal more readily to the historical mind than coincidents, and a little research revealed that the present occasion is rich in them. This day 206 years ago Robert Burns was hom in Alloway, Scotland, the poet whose genius gave our language so many inimitable lines that others would have liked to write, such as those composed for the epitaph of William Muir: &quot;If there&#39;s another world, he lives in bliss; if there is none, he made the best of this.&quot; Fifty years ago today, speaking from New York, Alexander Graham Bell made the first trans-continental telephone call to his assistant, Thomas A. Watson, in San Francisco, an experience that was fraught, I dare say, with more problems than the call put through to San Francisco by Father F1ynn two months or more ago when he invited me to address this diamond jubilee dinner. But more 115