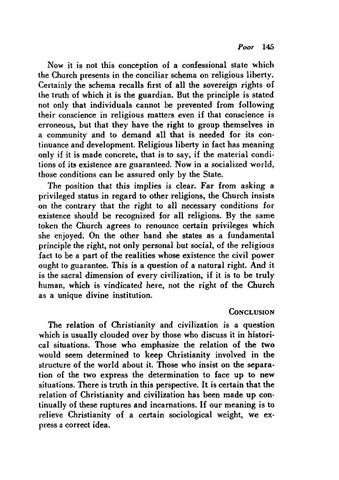 Now it is not this conception of a confessional state which the Church presents in the conciliar schema on religious liberty. Certainiy the schema recalls first of all the sovereign rights of the truth of which it is the guardian. But the principle is stated not only that individuals cannot be prevented from following their conscience in religious matters even if that conscience is erroneous, but that they have the right to group themselves in a community and to demand all that is needed for its con· tinuance and development. Religious liberty in fact bas meaning only if it is made concrete, that is to say, if the material condi· tions of its existence are guaranteed. Now in a socialized world, those conditions can be assured only by the State. The position that this implies is clear. Far from asking a privileged status in regard to other religions, the Church insists on the contrary that the right to all necessary conditions for existence should be recognized for all religions. By the same token the Church agrees to renounce certain privileges which she enjoyed. On the other band she states as a fundamental principle the right, not only personal but social, of the religious fact to be a part of the realities whose existence the civil power ought to guarantee. This is a question of a natural right. And it is the sacral dimension of every civilization, if it is to be truly human, which is vindicated here, not the right of the Church as a unique divine institution. CoNCLUSION

The relation of Christianity and civilization is a question which is usually clouded over by those who discuss it in histori· cal situations. Those who emphasi2e the relation of the two would seem determined to keep Christianity involved in the structure of the world about it. Those who insist on the separation of the two express the determination to face up to new situations. There is truth in this perspective. It is certain that the relation of Christianity and civilization has been made up con· tinually of these ruptures and incarnations. If our meaning is to relieve Christianity of a certain sociological weight, we ex· press a correct idea.