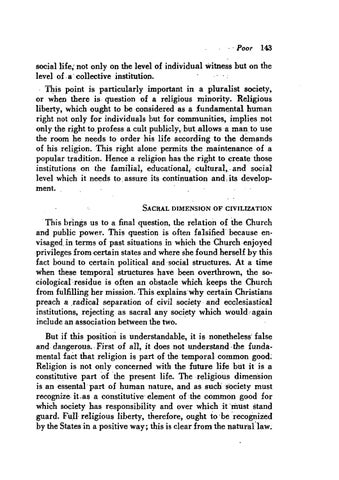 social life; not only on the level of individual witness but on the level of. a· collective institution. ·· · This point is particularly important in a pluralist society, or when there is question of a religious minority. Religious liberty, which ought to be considered as a fundamental human right not only for individuals but for communities, implies _not only the right to. profess a cult publicly, but. allows a man to use the room he needs to order his life according to the demands of his religion. This right alone permits the maintenance of a popular tradition. Hence a religion has the right to create those institutions on the familial, educational,- cultural, .. and social level which it needs to. assure its continuation and jts development. SACRAL DIMENSION OF CIVILIZATION

This br!ngs us to a final question, the relation of the Church and public power. This question is often falsified· because envisaged. in terms of past situations in which the Church enjoyed privileges from certain states and where she found herself by this fact bound to certain political and social structures. At a time when these temporal structures have been overthrown, the sociological residue is often an obstacle which keeps the Church from fulfilling her mission. This explains why certain Christians preach a .radical separation of civil society and ecclesiastical institutions, rejecting as sacral any society which would.- again include an association between the two. But if this position is understandable, it is nonetheless&#39; false and dangerous .. First of all, it does not understand ·the fundamental fact that religion is part of the temporal common good: Religion is not only concerned with the future life but it is a constitutive part the present life. The religious dimension is an essental· part of human nature, and as such society must recognize. it-as a constitutive· element of .the common good for which society has responsibility and over which it ·must stand guard. Full- religious liberty, therefore, ought to· be ·recognized by the States in a positive way; this is clear from the natura!&#39;law.