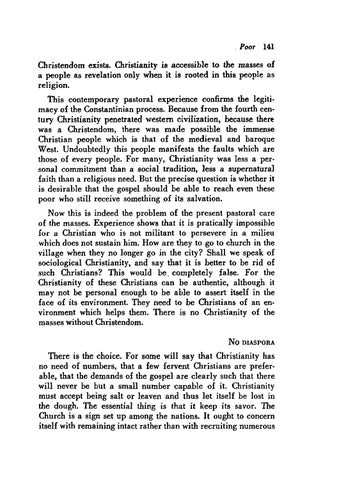 Christendom exists. Christianity is accessible to the masses of a people as revelation only when it is rooted in this people as religion. This contemporary pastoral experience confirms the legitimacy of the Constantinian process. Because from the fourth cen路 tury Christianity penetrated western civilization, because thert was a Christendom, there was made possible the immense Christian people which is that of the medieval and baroque West. Undoubtedly this people manifests the faults which are those of every people. For many, Christianity was less a per路 sonal commitment than a social tradition, less a supernatural faith than a religious need. But the precise question is whether it is desirable that the gospel should he able to reach even these poor who still receive something of its salvation. Now this is indeed the problem of the present pastoral care of the masses. Experience shows that it is pratically impossible for a Christian who is not militant to persevere in a milieu which does not sustain him. How are they to .go to church in the village when they no longer go in the city? Shall we speak of sociological Christianity, and say that it is better to be rid of such Christians? This would be. completely false. For the Christianity of these Christians can be authentic, although it may not be personal enough to be able to assert itself in the face of its environment. They need to be Christians of an en路 vironment which helps them. There is no Christianity of the masses without Christendom. No

There is the choice. For some will say that Christianity has no need of numbers, that a few fervent Christians are prefer路 able, that the demands of the gospel are clearly such that there will never be but a small number capable of it. Christianity must accept being salt or leaven and thus let itself be lost in the dough. The essential thing is that it keep its savor. The Church is a sign set up among the nations. It ought to concern itself with remaining intact rather than with recruiting numerous