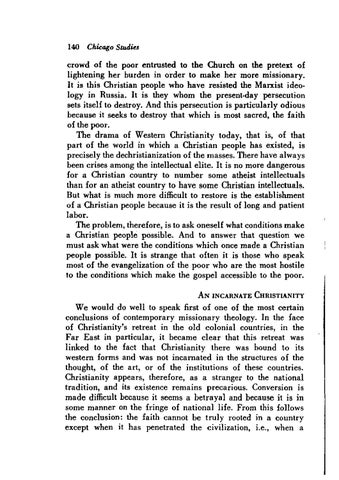 crowd of the poor entrusted to the Church on the pretext of lightening her burden in order to make her more missionary. It is this Christian people who have resisted the Marxist ideology in Russia. It is they whom the present-day persecution sets itself to destroy. And this persecution is particularly odious because it seeks to destroy that which is most sacred, the faith of the poor. The drama of Western Christianity today, that is, of that part of the world in which a Christian people has existed, is precisely the dechristianization of the masses. There have always been crises among the intellectual elite. It is no more dangerous for a Christian country to number some atheist intellectuals than for an atheist country to have some Christian intellectuals. But what is much more difficult to restore is the establishment of a Christian people because it is the result of long and patient labor. The problem, therefore, is to ask oneself what conditions make a Christian people possible. And to answer that question we must ask what were the conditions which once made a Christian people possible. It is strange that often it is those who speak most of the evangelization of the poor who are the most hostile to the conditions which make the gospel accessible to the poor. AN INCARNATE CHRISTIANITY

We would do well to speak first of one of the most certain conclusions of contemporary missionary theology. In the face of Christianity&#39;s retreat in the old colonial countries, in the Far East in particular, it became clear that this retreat was linked to the fact that Christianity there was bound to its western forms and was not incarnated in the structures of the thought, of the art, or of the institutions of these countries. Christianity appears, therefore, as a stranger to the national tradition, and its existence remains precarious. Conversion is made difficult because it seems a betrayal and because it is in some manner on the fringe of national life. From this follows the conclusion: the faith cannot be truly rooted in a country except when it has penetrated the civilization, i.e., when a