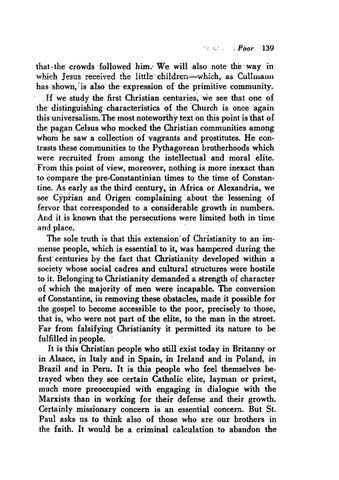 that·• the crowds followed him; We will also note the ·way in which Jesus received the little·children-which, as Culhnann has :shown,: is also· the ·expression of- the primitive community. . If we study the first Christian centuries~ we see that one of the distinguishing· characteristics of the ·church is once ·again this· universalism: The most noteworthy text this point is that of the pagan Celsus who mocked the Christian communities among whom he saw a collection of vagrants and prostitutes. He contrasts these communities to the Pythagorean brotherhoods which were recruited from among the intellectual and moral ·elite. · Frorri this point of view, moreover, nothing is more inexact than to ·compare. the pre-Constantinian times to the time of Constantine. As early as the third century, in Africa or Alexandria, we see CYJ&gt;~ian and Origen complaining ·about· the lessening of fervor that corresponded to a considerable growth in numbe.rs. And it is known that the persecutions were limited both in time and place: The sole truth is that this extension&#39; of Christianity to an immense people, which is essential to it, was hampered during the first&#39; centuries by the fact that Christianity developed within a socieiy whose social cadres and cultural structures were hostile to it. Belonging to Christianity. demanded a strength of character of which the majority of men were incapable. The conversion of Constantine, in removing these obstacles, made it possible for the :gospel to become accessible to the poor, precisely to ·those, that is; who were not part of the elite, to the man in the street. Far from falsifying Christianity it permitted its nature to be fulfilled in people. · It is this Christian people who still eXist today in Britanny or in Alsace, in Italy and in Spain, in Ireland and in Poland, in Brazil and in Peru. It is this people who feel themselves betrayed when they see certain Catholic· elite, layman or priest, much more preoccupied with engaging in dialogue with the Marxists than in working for their defense and their growth. Certainly missionary concern is an essential concern. But St. Paul asks us to think also of those who are our brothers in the faith. It would be a criminal calculation to abandon the