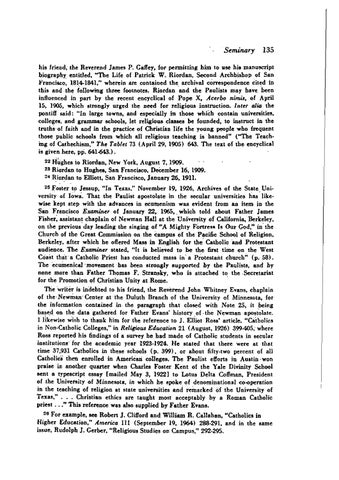 his friend, the Reverend James P. GaHey, for penniuing him to li&amp;e his manu!Cript biography entitled, &quot;The Life of Patrick W. Riordan, Second Archbishop of San .franci&amp;co~ 1814-1841,&quot; wherein are contained the archival cOrrespondence cited in this and the following three footnotes. Riordan &#39;and the Paulists may have_ .been influenced in part by the recent encyclical of Pope X, Acerbo nirnU, of April 15, 1905, which strongly urged tbe need for reJigiom instruction. 1n-ter alia the pontiff said: &quot;In large towns, and especially in those whiCh contain universities, colleges, and grammar schools, let religious classes be founded, to instruct in the truthir of faith and in the practice of Christian life the young people who frequent those public schools from which all religious teaching is banned&quot; (&quot;The Teach· ing of Cathecbism,&quot; The Tablet 73 {April 29, 1905) 643. The text of the encyclical is given here, pp. 641-643.). 22 Hh·ghes io Riordan, New York, August 7, 1909. 28 Riordan to Hughes, San Francisco, DeCember 16, 1909. 24 ~io~an

23 foeter to Jessup, &quot;In Texas,&quot; November 19, 1926, Archives of the State Uni· versitY of lo.w8. That the Paulist apostolate in the secular universities lias .likewise kept step with the advances in ecumenism was evident from an item in the San Francisco Examiner of January 22,_ 1965,. which told about Father James Fisher: asSistant chaplain of Newman Hall at the UniVenity of California, Berkeley, on the previous. day leading the singing of uA Mighty FOrtre~~ h Our God,&quot; in. the Church of the Great Commission on the Campus Of the Pacific School of Religion, Berkeley, after which he offered M8.58 in English for the. Catholic &quot;and Protestant audience. The Examiner stated, &quot;It is believed to be the first time on the West COaSt thS:t· a Catholic Priest has cOnducted mass in&#39; a Pr.otestailt church&quot; {p. 58). The &quot;ecuinenicaJ ·movement ·bas been strongly supported by the PauJists, and by none more than Father Thomas F. Stransky, who is attached to the .Secretariat · for the Promotion of Christian Unity at Rome. The ·wnier is indebted to his friend, the Reverend John Whitney Evans, chaplain of the·.NewrDan· Center at the Duluth Branch o£ the University of MinnesDta, for the information contained in· the paragraph that closed with Note 25, it being base.d on the data gathered for Father Evans&#39; history of ·the Newman aposlolate. I likewise Wish to thank him for the reference to J. Eliiot Ross&#39; article, ucatholics in Non-Catholic Colleges,&quot; in ReliBiow Education 21 (August, 1926) 399-405; where Ross reported his findings of a survey he had made of Catholic students in secular institutions· for the academic year 1923-1924. He stated that there were at that time 37,931 Catholics in these schools (p. 399), or about fifty-two percent of all Catholic$ then enrolled in AmeriCan colleges. The Paulist efforts in Auatiil ·won praise in another quarter when Charles Foster Kent of the Yale Divinity School sent a typescript essay [mailed May 3, 1922] to Lotus Delta Coffman, President of the Univenity of Minnesota, in which he spoke of denominational co~perarion in the teaching of religion at state universities and reinarked Of the University of Texas,&quot; . . . Christian ethics are taught most acceptably by a Roman Catholic priest ..•&quot;&quot;This reference was also supplied by Father Evans. 26