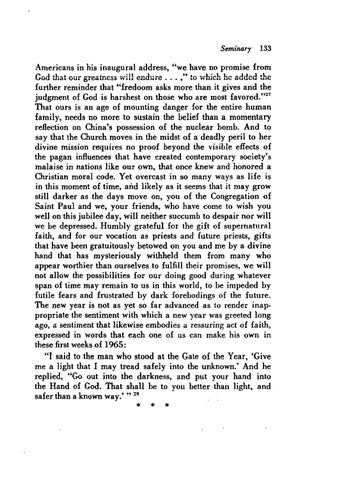 Americans in his inaugural address, &quot;we have no promise from 1 ···&#39;&quot;&#39;cl. h·dd-d •l.c G0~J 0 •&#39;&quot;~· UJal. o··Ui gre~-e·· a,,..U ::,:J ···&#39;1 e-d··-e U UJ, • • &quot; &#39; &quot;•o c. nH1. I.&#39;-&#39; a. .., &amp;..&amp;ll further reminder that &quot;fredoom asks more than it gives and the judgment of God is harshest on those who are most favored. &quot; 27 That ours is an age of mounting danger for the entire human family, needs no more to sustain the belief than a momentary reflection on China&#39;s possession of the nuclear bomb. And to say that the Church moves in the midst of a deadly peril to her divine mission requires no proof beyond the visible effects of the pagan influences that have created contemporary society&#39;s malaise in nations like our own, that once knew and honored a Christian moral code. Yet overcast in so many ways as life is in this moment of time, and likely as it seems that it may grow still darker as the days move on, you of the Congregation of Saint Paul and we, your friends, who have come to wish you well on this jubilee day, will neither succumb to despair nor will we be depressed. Humbly grateful for the gift of supernatural faith, and for our vocation as priests and future priests, gifts that have been gratuitously betowed on you and me by a divine hand that has mysteriously withheld them from many who appear worthier than ourselves to fulfill their promises, we will not allow the possibilities for our doing good during whatever span of time may remain to us in this world, to be impeded by futile fears and frustrated by dark forebodings of the future. The new year is not as yet so far advanced as to render inap· propriate the sentiment with which a new year was greeted long ago, a sentiment that likewise embodies a ressuring act of faith, expressed in words that each one of us can make his own in these first weeks of 1965: &quot;I said to the man who stood at the Gate of the Year, &#39;Give me a light that I may tread safely into the unknown.&#39; And he replied, &quot;Go out into the darkness, and put your hand into the Hand of God. That shall be to you better than light, and safer than a known way.&#39; &quot; 28 n&#39;J,