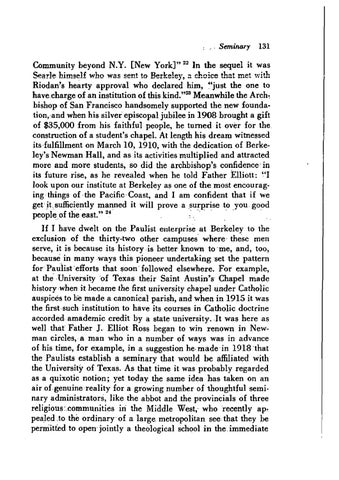 Community beyond N.Y. [New York]&quot; 22 In the sequel it was Searle hims~!£ who was sent to Berkeley, a choice that met v:ith Riodan&#39;s hearty approval who declared him, &quot;just the one to have. charge of an institution of this kind.&quot;23 Meanwhile the Arch, bishop of San Francisco handsomely supported the new foundation,.and when his silver episcopal jubilee in 1908 brought a gift of $35,000 from his faithful people, he turned it over for the. construction of a student&#39;s chapel. At length his dream witnessed its fulfillment on March 10, 1910, with the dedication of Berkeley&#39;s Newman Hall, and as its activities multiplied and attracted more and more students, so did the archbishop&#39;s confidence· in its future rise, as he revealed when he told Father Elliott: &quot;I look upon our institute at Berkeley as one of the most encourag· ing things of -the Pacific Coast, and I am confident that if we get·it.sufliciently manned it will prove a surprise to you good . :. ·. · · • · · .. people of tlie.east.&quot; 24

If I have dwelt on the Paulisl enterprise at Berkeley to the exclusion· of the thirty-two other campuses. where· these men sel&quot;Ve, it is because its history -is better known to ·me, and, too, because in many .ways this pioneer undertaking set the pattern for Paulist·efforts that soon· followed elsewhere. For example, at the -University ·of Texas their Saint Austin&#39;s Chapel made history -when it became the first university chapel under Catholic auspices to lie made a canonical parish, and when in 1915 it was the first· such institution to have its courses in Catholic doctrine accorded- amademic credit by a state university .. It was here as well that Father J. Elliot Ross began to win renown in Newman circles, a man who in a number of ways was in advance of his time, for example, in a suggestion he. made in 1918 ·that the Pa ulists establish a seminary that would be affiliated with the University of Texas. As that time it was probably regarded as a quixotic notion; yet today the same idea has taken on an air of. genuine reality for a growing number of thoughtful seminary administrators, like the abbot and .the provincials of three religious:.communities iri the Middle West, who recently ap. pealed .to the ordinary· of a large. metropolitan see that they be perniitted to open· jointly a theological school in the. immediate