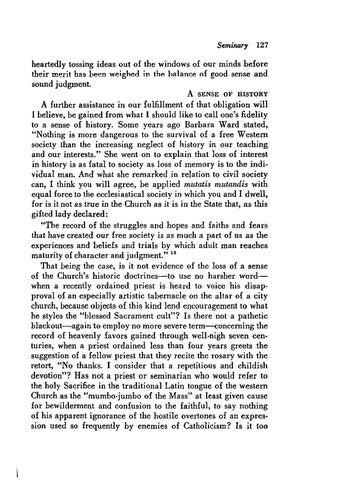 heartedly tossing ideas out of the windows of our minds before their merit has been weighed in thfl halancfl of good sense and sound judgment.

A further assistance in our fulfillment of that obligation will I believe, be gained from what I should like to call one&#39;s fidelity to a sense of history. Some years ago Barbara Ward stated, &quot;Nothing is more dangerous to the survival of a free Western society than the increasing neglect of history in our teaching and our interests.&quot; She went on to explain that loss of interest in history is as fatal to society as loss of memory is to the individual man. And what she remarked in relation to civil society can, I think you will agree, be applied mutatis mutandis with equal force to the ecclesiastical society in which you and I dwell, for is it not as true in the Church as it is in the State that, as this gifted lady declared: &quot;The record of the struggles and hopes and faiths and fears that have created our free society is as much a part of us as the experiences and beliefs and trials by which adult man reaches maturity of character and judgment.&quot; 18 That being the case, is it not evidence of the loss of a sense of the Church&#39;s historic doctrines-to use no harsher wordwhen a recently ordained priest is heard to voice his disapproval of an especially artistic tabernacle on the altar of a city church, because objects of this kind lend encouragement to what he styles the &quot;blessed Sacrament cult&quot;? Is there not a pathetic blackout-again to employ no more severe term-concerning the record of heavenly favors gained through well-nigh seven centuries, when a priest ordained less than four years greets the suggestion of a fellow priest that they recite the rosary with the retort, &quot;No thanks. I consider that a repetitious and childish devotion&quot;? Has not a priest or seminarian who would refer to the holy Sacrifice in the traditional Latin tongue of the western Church as the &quot;mumbo-jumbo of the Mass&quot; at least given cause for bewilderment and confusion to the faithful, to say nothing of his apparent ignorance of the hostile overtones of an expression used so frequently by enemies of Catholicism? Is it too