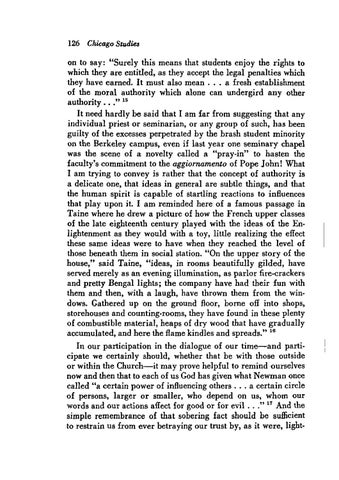 on to say: &quot;Surely this means that students enjoy the rights to which they are entitled, as they accept the legal penalties which they have earned. It must also mean ... a fresh establishment of the moral authority which alone can undergird any other authority â&amp;#x20AC;˘â&amp;#x20AC;˘.&quot; 10 It need hardly be said that I am far from suggesting that any individual priest or seminarian, or any group of such, has been guilty of the excesses perpetrated by the brash student minority on the Berkeley campus, even if last year one seminary chapel was the scene of a novelty called a &quot;pray-in&quot; to hasten the faculty&#39;s commitment to the aggiomamento of Pope John! What I am trying to convey is rather that the concept of authority is a delicate one, that ideas in general are subtle things, and that the human spirit is capable of startling reactions to influences that play upon it. I am reminded here of a famous passage in Taine where he drew a picture of how the French upper classes of the late eighteenth century played with the ideas of the Enlightenment as they would with a toy, little realizing the effect these same ideas were to have when they reached the level of those beneath them in social station. &quot;On the upper story of the house,&quot; said Taine, &quot;ideas, in rooms beautifully gilded, have served merely as an evening illumination, as parlor fire-crackers and pretty Bengal lights; the company have had their fun with them and then, with a laugh, have thrown them from the windows. Gathered up on the ground floor, borne off into shops, storehouses and counting-rooms, they have found in these plenty of combustible material, heaps of dry wood that have gradually accumulated, and here the flame kindles and spreads.&quot; 16 In our participation in the dialogue of our time-and participate we certainly should, whether that be with those outside or within the Church-it may prove helpful to remind ourselves now and then that to each of us God has given what Newman once called &quot;a certain power of influencing others ... a certain circle of persons, larger or smaller, who depend on us, whom our words and our actions affect for good or for evil ...&quot; 17 And the simple remembrance of that sobering fact should be sufficient to restrain us from ever betraying our trust by, as it were, light-