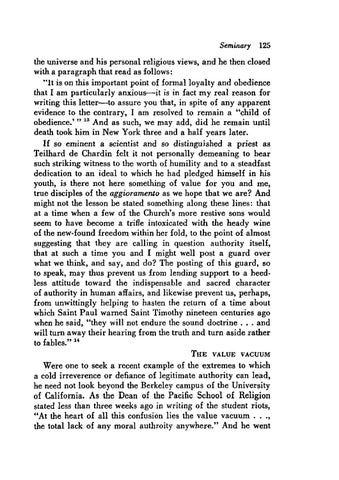 the universe and his personal religious views, and he then closed with a paragraph that read as follows: &quot;lt is on this important point of formal loyalty and obedience that I am particularly anxious-it is in fact my real reason for writing this letter-to assure you that, in spite of any apparent evidence to the contrary, I am resolved to remain a &quot;child of obedience.&#39; &quot; 13 And as such, we may add, did he remain until death took him in New York three and a half years later. If so eminent a scientist and so distinguished a priest as Teilhard de Chardin felt it not personally demeaning to bear such striking witness to the worth of humility and to a steadfast dedication to an ideal to which he had pledged himself in his youth, is there not here something of value for you and me, true disciples of the aggioramento as we hope that we are? And might not the lesson be stated something along these lines: that at a time when a few of the Church&#39;s more restive sons would seem to have become a trifle intoxicated with the heady wine of the new-found freedom within her fold, to the point of almost suggesting that they are calling in question authority itself, that at such a time you and I might well post a guard over what we think, and say, and do? The posting of this guard, so to speak, may thus prevent us from lending support to a heedÂˇ less attitude toward the indispensable and sacred character of authority in human affairs, and likewise prevent us, perhaps, from unwittingly helping to hasten the return of a time about which Saint Paul warned Saint Timothy nineteen centuries ago when he said, &quot;they will not endure the sound doctrine .â&amp;#x20AC;˘. and will tum away their hearing from the truth and turn aside rather to fables.&quot; &quot; THE VALUE VACUUM

Were one to seek a recent example of the extremes to which a cold irreverence or defiance of legitimate authority can lead, he need not look beyond the Berkeley campus of the University of California. As the Dean of the Pacific School of Religion stated less than three weeks ago in writing of the student riots, &quot;At the heart of all this confusion lies the value vacuum . . . , the total lack of any moral authroity anywhere.&quot; And he went